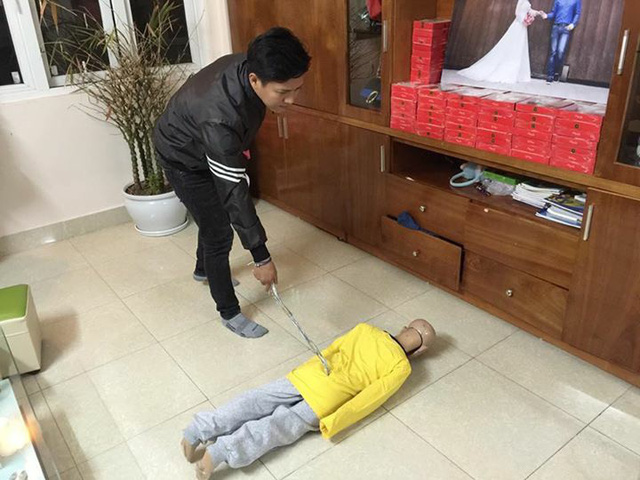 Police in Hanoi have apprehended a man for spending a year physically abusing his ten-year-old son, resulted in scaring and several injuries across the young boy’s body.

An official from the department of police in Cau Giay District confirmed with Tuoi Tre (Youth) newspaper on Thursday that Tran Hoai Nam has been taken into custody for the abusing his son T.G.K..

Nam admitted to beating his child, though chose to put the blame on the boy’s “mischievous” behavior.

The most recent act of violence was triggered when K. was caught eating without permission on December 5.

The boy was so terrified that he secretly caught a bus to his grandmother’s house in the evening of the same day and the situation was the reported to local police officers.

According to the victim, he has been beaten by his father over the past year and it had been nearly two years since he was allowed to attend school.

K. shared that he was also physically abused by his step mother, who was not at home when police arrived.

The young boy was admitted to the hospital where he underwent a physical examination and doctors were able to diagnose several rib fractures, wounds, and scars throughout his body.

N.T.N., K.’s birth mother, told police that she has been caring for her youngest child and K. has been staying with his father since the couple divorced.

N. said that immediately following the divorce she was able to visit K. every week until Nam remarried and moved to a new location.

“I asked a lot of people but no one had any idea where they gone. I just hoped Nam would take care of our child,” the mother stated.

“I cannot believe my son has been living in such misery,” she added.