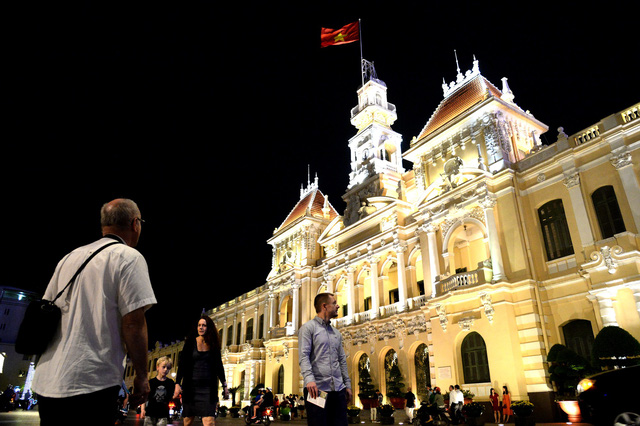 From downtown areas to the suburb, a range of public activities will be held across Ho Chi Minh City on the evening of December 31 to celebrate the transition into 2018.

The annual light show will remain until January 20, 2018, using funds contributed from the private sector.

Landmark buildings such as the City Hall, the Municipal Theater, the Ho Chi Minh City Museum, the headquarters of District 1’s administration, the Central Post Office, and the Monument of Ho Chi Minh on Nguyen Hue Pedestrian Street will also be lit up with artistic lighting during the festive season.

A New Year’s countdown event will be held on Nguyen Hue Pedestrian Street on the evening of December 31 with a 3-D mapping show illuminating the city hall building located at the street’s end.

On Le Duan Street, between Nam Ky Khoi Nghia and Pasteur, a concert paying tribute to soccer fans will be organized on the same night.

Similar art performances will be put together across the city in public spaces such as Gia Dinh Park, the Youth Cultural House, and university campuses and dormitories in District 2, Binh Tan, Nha Be and Can Gio Districts on December 31 and January 1.

Some of the events will be selected for live broadcast on the city-run television channel for stay-at-home viewers.

Residents of the Phu My Hung Urban Area in District 7 will be treated to a range of New Year celebration events jointly organized by the area’s developer and the local government.

The city’s administration has requested that the municipal Department of Transport arrange enough parking lots to withstand the influx of people to these areas.

The local fire department is also on high alert during the New Year celebrations while the emergency wards at hospitals in the city will remain throughout the event to respond in a timely matter to any arising emergency.