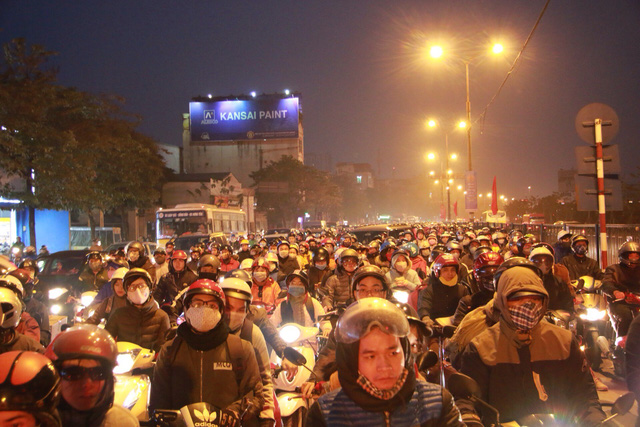 People heading back to Hanoi and Ho Chi Minh City following the New Year holiday have brought about severe congestion at the entrances to the two major cities.

The three-day break lasted from Saturday last week to Monday this week, and most citizens have returned to their normal lives on Tuesday.

In the Vietnamese capital, bottlenecks started to form at around 4:30 pm and lingered until 6:30 pm, with vehicles traveling at a snail’s pace.

Many streets including Ring Road 3, Giai Phong, Nguyen Huu Tho, and Ngoc Hoi and such major bus stations as My Dinh and Giap Bat were overloaded.

Meanwhile, most entrances to Ho Chi Minh City were filled with vehicles as of 6:00 pm.

At the western gate, gridlock was most serious along the expressway connecting the southern hub with the Mekong Delta province of Tien Giang.

A collision between two passenger buses along this route exacerbated the problem, as many vehicles were forced to take a detour for officers to deal with the accident.

Congestion was less severe at the eastern entrance of the city and was quickly alleviated.

Managers of the Cat Lai ferry station in District 2 prepared seven high-capacity ferries to meet the high demand for transportation during the period.

Some 85,000 passengers were ferried via Cat Lai on Monday.

An hours-long traffic jam took place at the Rach Mieu Bridge, which links Tien Giang and Ben Tre Provinces in the Mekong Delta.

During the New Year holiday, 67 people died in road accidents, a huge number of people were on the roads to get back to their hometowns from the big cities and to come to touristy destinations, leading to a denser volume of vehicles traveling, according to the national traffic safety committee.

Official figures showed that over 8,200 people lives were lost to traffic accidents in Vietnam in 2017.