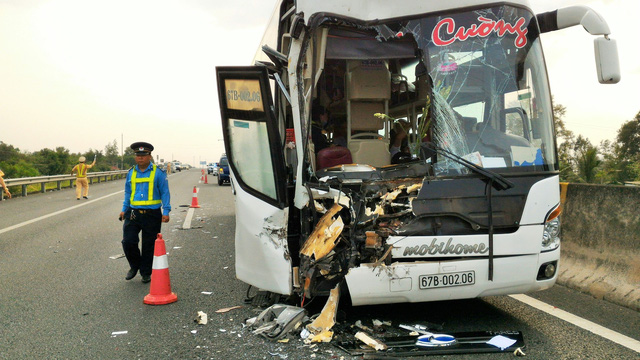 A total of 67 people were killed by traffic accidents across Vietnam during the three-day New Year holiday.

According to the National Committee for Traffic Safety, 124 traffic crashes occurred in the country from December 30, 2017 to January 1, 2018, claiming 67 lives and injuring 74 people.

A huge number of people traveled back to their hometowns from the big cities and to touristy destinations during the three days, leading to a denser volume of vehicles on the roads.

The number of accidents increased by 33.3 percent, while the death tolls fell by 15.2 percent compared to the same period of last year.

Some of the fatal road crashes included the collision between an automobile and a motorcycle in the south-central province of Binh Dinh on Saturday morning, resulting in the deaths of two people on the bike.

Another accident happened between a 45-seater van and a motorbike at 9:15 am on Sunday in the northern province of Thai Nguyen, killing a 12-year-old and a nine-year-old.

Serious traffic jams mainly occurred at the entrances to Hanoi and Ho Chi Minh City on Saturday and Monday, the National Committee for Traffic Safety added.

A large number of people rushing to downtown areas of the two major cities for New Year celebration also caused roads to be congested.