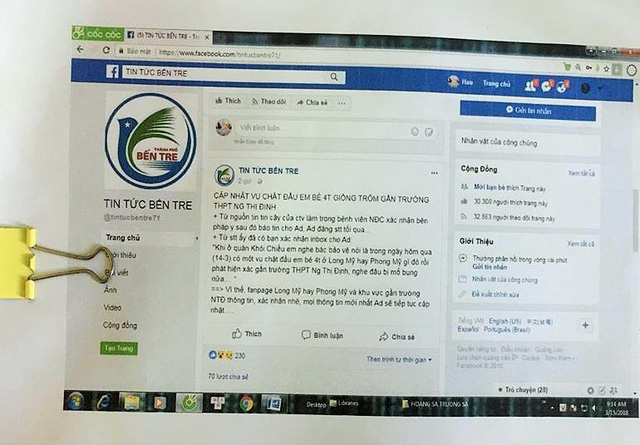 A man in southern Vietnam who manages a fan page on social media has received a financial penalty for publishing a worrisome canard.

Nguyen Minh Chanh, a 29-year-old resident in Ben Tre Province, has been required to pay VND10 million (US$439) after he spread a piece of fake news on his Facebook fan page.

Thai Huynh Tu, a chief inspector from the provincial Department of Information and Communications, provided the information on Tuesday.

Chanh’s page, ‘Ben Tre News,’ followed by 30,000 people, posted the news in which a four-year-old child was decapitated, after one of his friends told him via social media on March 14 that the incident had been confirmed by an official.

He gave an update on the case the next day, saying it had been verified by a hospital in Ben Tre.

The news was shared by more than 70 people.

But he later deleted its original version after a person told him that it was incorrect.

Those who spread misinformation shall be fined VND10-15 million ($439-659), according to Vietnamese law.