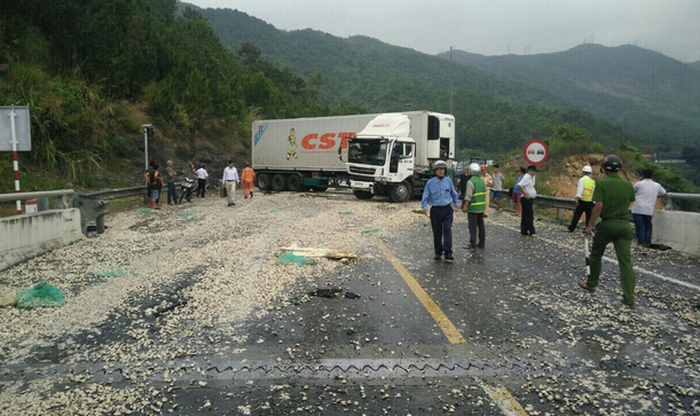 A multiple-vehicle collision occurred at the entrance to the Hai Van Tunnel in central Vietnam late on Thursday afternoon, injuring three people and blocking traffic for hours.

The accident happened when a truck carrying thousands of metric tons of frozen clams from the Mekong Delta province of Tien Giang experienced break failure.

The truck rear-ended a 45-seater passenger bus before hitting another container truck from the south-central province of Binh Thuan and a minitruck traveling in the opposite direction.

The container truck from Binh Thuan wound up on its side, blocking traffic in both directions, while the minitruck was pushed entirely off the road. Frozen clams from the Tien Giang truck filled the street.

All four vehicles and a section of the road fence were damaged.

Three people were injured and admitted to the hospital for emergency treatment.

Competent authorities later arrived at the scene to control traffic and manage with the incident.

Local residents also helped pick up the clams and clean the street.

Traffic at the southern gate of the tunnel returned to normal by 9:00 pm the same day.

Opened in 2005, the Hai Van Tunnel runs under the Hai Van Pass, on the border of Da Nang City and Thua Thien - Hue Province.

It is the longest tunnel in Southeast Asia, stretching a total of 6.28 kilometers.