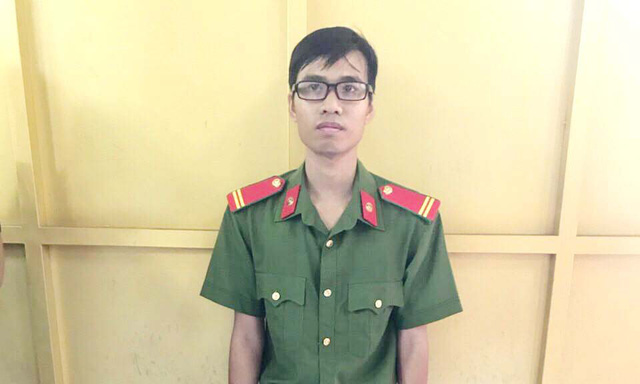 Three people have been arrested for disguising themselves as police officers and disrupting public order in downtown Ho Chi Minh City.

Competent agencies spotted Nguyen Hung Thai, 23, dressing up as a policeman and carrying handcuffs at Tao Dan Park in District 1 on Saturday morning.

They also captured Tran Quoc Dat and Vu Quoc Huy, both 39, for wearing jackets of police officers and showing signs of disturbing public order on the same morning.

Dat and Huy brought along a police certificate with the name of another person. Officers are checking the authenticity of the document.

About 100 people were also escorted to police stations for assembling and disrupting public order in the city center as of 3:00 pm on Saturday.

They were carrying knives, screwdrivers, tear gas sprayers and several other dangerous weapons, according to officers.

At the police stations, Thai refused to disclose how he got the police uniform and handcuffs as well as why he disguised himself as a policeman.

A source from the municipal Department of Police stated that the agency has recently identified multiple suspects behind recent riot-like situations in Vietnam.

They are members of overseas terrorist groups who colluded with local individuals to carry out their plans to oppose the Vietnamese state and causing social unrest, the source said.

The suspects were trained and instructed on how to manipulate local residents into joining them.

Some of the suspects would then dress up as Vietnamese police officers to attack people in street marches, turning even more citizens against local authorities and the state, the source elaborated.

Police in Ho Chi Minh City said they had handled a total of 310 people who broke the law while joining the marches last weekend.

As of Friday, seven of these people remained in detention, 175 were given administrative penalties, one was hospitalized for compulsory medical treatment, and 38 others were bailed out by their families.