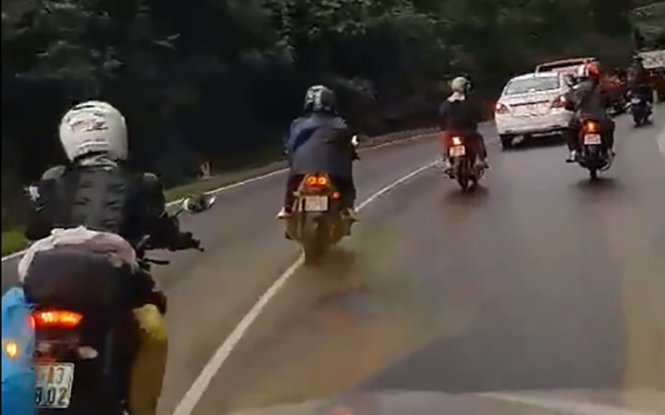 A group of motorcyclists were recently captured on video speeding with wailing sirens and loud exhaust pipes in the wrong lane of a major highway in southern Vietnam.

In a video that circulated widely on social media, the bikers were seem running along National Route 20, which links Ho Chi Minh City and the tourist city of Da Lat in the Central Highlands.

A resident along the road said hurtling motorcycles appeared in the largest number on the weekend, when the loud noise from mufflers lasted between the evening and morning of the following day.

Locals said they were startled and terrified by the public nuisance.

Nguyen Hoang Dao, driver of a long-haul bus traveling frequently on the national route, said he had to steer with great caution at night and in the early morning so as to avoid collision with motorcycles hurtling at over 100 kilometers per hour.

“They blatantly ran in the car and bus lanes. Whenever they zipped past, the resultant piercing sound sent a chill down my spine,” Dao recalled.

Another driver, Nguyen Van Can, said he had usually witnessed groups of bikers turning on glaring headlights and sirens while traveling in the wrong lanes of multiple Vietnamese roads.

The danger posed by the situation increased as many were even retrofitted with LED lights that dazzled car drivers in the opposite direction, Can added.

It was not easy to catch roaring motorcyclists.

When detected with traffic violations, bikers were riding so rapidly that police motorcycles failed to keep pace with them and officers even could not note their license plate numbers, according to Cu Tuan Nghia, deputy head of the traffic police in Lam Dong Province, where multiple complaints of loud pipes were received.

Around three or four successive checkpoints had to be set up one after another so that motorcyclists who potentially caused danger to other drivers could be stopped, Nghia said.

Bikers were booked for various offenses like speeding, turning on glaring lights, overtaking carelessly, switched on sirens used only for emergency vehicles and modifying motorcycles in a way that is legally banned, Nghia added.