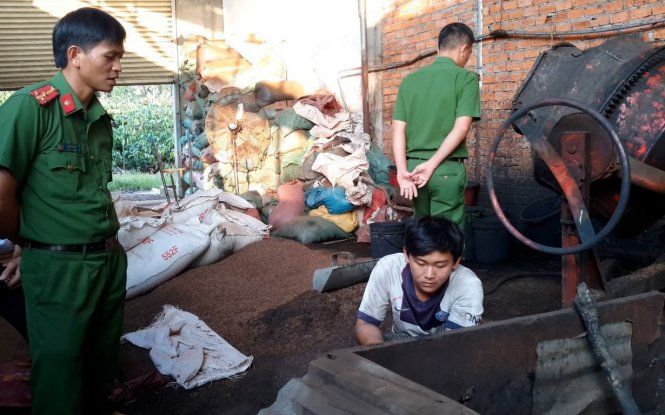 Prosecutors in Vietnam have charged five people for violations in food safety after they were discovered in April to have been mixing a battery-dyed compound of gravels and coffee bean skins into black peppers to sell for more profit.

The People’s Procuracy of Dak Nong Province in the Central Highlands on Wednesday said it had transferred all case files to a local court for trial of the defendants.

According to their indictment, Dung and Tho have been business partners since 2003, as both are directors of companies involved in producing and selling black peppers.

In 2015, Tho allegedly introduced Dung to a new method of reaping higher profits – by mixing ground gravels and coffee bean skins into black peppers to increase the weight of their shipments.

The two agreed that Tho would be in charge of finding suppliers of the dirty ‘fillers’, while Dung will pay her VND1,000 (US$0.043) for every kilogram of gravels and coffee bean skins acquired.

Tho managed to get in contact with Loan, who provided them with three metric tons of the mixture as samples.

Dung mixed the dirty ingredients into her black peppers and sold them for VND175,000 ($7.5) per kilogram.

Since September 2015, Bao moved in with Loan and the couple continued with the production of ground gravels and coffee bean skins for Tho and Dung.

After some sub-quality bacthes where the dirty mixture did not resemble authentic black peppers, Nguong returned the shipment and told Loan to use a black dye to generate a more persistent color.

Loan and Bao decided to break open old batteries for the black powder found in their cores, which is manganese dioxide, and use it to mix with water to create their own ‘dye’.

On April 15, learning that Loan and Bao’s production facility had been busted by police officers, Dung disposed of 9,800 kilograms of the dirty ingredients she had brought from the duo.

As there were 4,000 kilograms of black peppers already mixed with the fillers at her place, Dung decided to add another 5,000 kilograms of authentic peppers to the mix and with the intention of having them sold to another company for disposure on April 24.

However, the entire batch was confiscated by police officers before the transaction could take place.

The indictment states that both Dung and Tho are aware that the mixture they bought from Loan and Bao contained dirty and toxic ingredients obtained from used batteries, but persisted with their activity nonetheless.

Lab tests on black peppers found at Dung’s facility conducted by the forensic department under Vietnam’s Ministry of Public Security shows that dirty ingredients made up 18.34 percent of the samples.

Among the chemicals found are manganese dioxide, zinc chloride, and ammonium chloride, which are not allowed in food production according to Vietnam’s regulations.