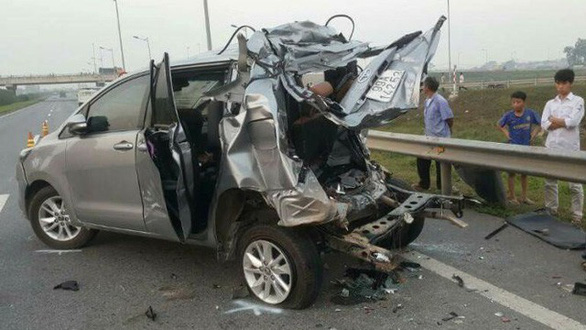 The Supreme People’s Court of Vietnam has asked a court in Thai Nguyen Province, located in northern Vietnam, to hand over the case file of a collision between a tractor-trailer and a reversing car for review, after jail time imposed on the truck driver gave rise to a heated legal debate in the country.

The top court also demanded that the People’s Court of Thai Nguyen made a full report on the case, said Nguyen Tri Tue, deputy chief justice of the Supreme Court.

Tue said the six-year jail sentence handed to the truck driver, 33-year-old Le Ngoc Hoang, has been met with criticism from the public and legal experts, prompting the Supreme Court to step in.

“If mistakes were made [in reaching the judgment], they will be corrected by competent bodies,” Tue said.

“The court’s principle is not letting the innocent suffer from injustice,” he added.

In the meantime, the judgment reached by the Thai Nguyen court still stands.

Nguyen Van Chung, chief judge at the People’s Court of Thai Nguyen, confirmed to Tuoi Tre (Youth) newspaper on Monday that the court had handed over the case file to the Supreme Court for review.

Asked to give comments on the case, Chung said as a judge he was not authorized to give opinions on a sentence that had already taken effect.

The board of judges that reached the sentence would take legal responsibility for their judgment, he added.

On November 19, 2016, a semi-trailer truck collided with a compact minivan on the Hanoi-Thai Nguyen Expressway in northern Vietnam, killing four and injuring two passengers in the car.

The car was carrying more passengers than allowed and was moving backward in reverse gear on the high-speed road, trying to reach an exit it had missed.

A court in Thai Nguyen in May sentenced truck driver Hoang to eight years and car driver Ngo Van Son, 40, to ten years behind bars.

Hoang and Son's sentences were last week commuted to six years and nine years in prison, respectively, after the second-instance court considered their appeals.

The two are responsible for paying combined compensation of VND1.2 billion (US$51,000) to families of the victims.

Vietnamese legal experts are calling on the Thai Nguyen court to revoke the prison sentence it imposed on the truck driver.