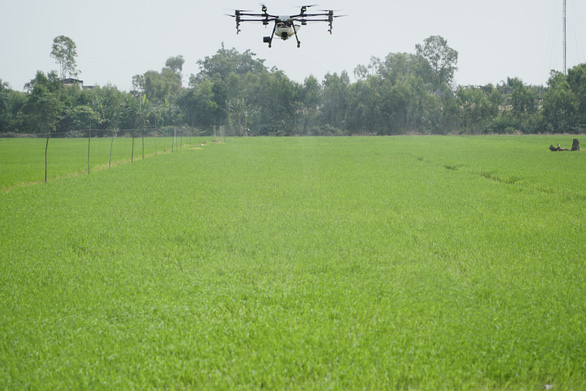 Farmers in Vietnam’s Mekong Delta were excited to see the performance of a drone spreading pesticides over rice paddies on Wednesday.

The showcase, jointly held by a local farming collective and private firm, took place in Dong Thap Province, one of the delta region’s main rice baskets.

The remotely controlled hexacopter was fitted with a tank carrying ten liters of pesticide, enough to cover one hectare – about the same area as a standard rugby pitch –  in just ten minutes.

The aerial vehicle is utilized to reduce the use of pesticide by 30 percent, decreasing the need for extra farmhands and reducing the risks of high exposure to chemicals.

Around 50 laborers are typically needed to spray 200 hectares, but the agricultural drone only requires a spray team of two to three members.

The farming collective has announced plans to put the drone into widespread use in part of the province, charging VND200,000 (US$9) for every hectare sprayed.

Dong Thap is one of the first Vietnamese provinces to test drones in farming.

Early last year, a Japanese enterprise also showcased a drone with a similar design to farmers in the area.