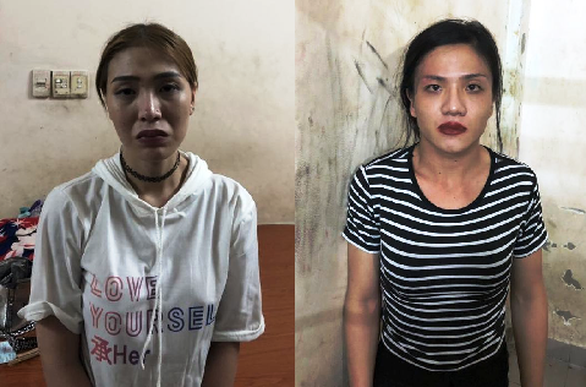 Police in Ho Chi Minh City have arrested two men who disguised as women to steal from a foreigner on Saturday night, when people were celebrating Vietnam’s winning the ASEAN Football Federation (AFF) Championship.

Officers in District 1 confirmed they are holding Le Thanh Duong, 23, and Nguyen Minh Canh, 25, in custody for theft.

At around 1:30 am on Sunday, Duong and Canh, dressed as women, rode a motorbike and approached Jack Sanders, a 34-year-old Canadian man, who was standing in front of a house on Bui Thi Xuan Street.

The 'girls' then had a short conversation with Sanders before tricking him into joining them on their motorcycle.

The suspects took the foreigner to a nearby alley when they snatched his phone and escaped on their vehicle, leaving the victim behind.

A team of the district’s police unit, who was patrolling the area at the time, was aware of the incident and started chasing down the thieves.

They were able to capture the criminals on Luong Huu Khanh Street.

At the police station, Duong and Canh claimed they dressed up as women and preyed on foreigners to steal from them.

The two were previously convicted of theft and robbery and have just finished their jail terms, according to officers.

They believed it was a good opportunity to carry out the crime last night, as most people were busy celebrating the national football team’s victory at the AFF Championship final.

Vietnam beat Malaysia 1-0 in the second leg of the final on their home turf in Hanoi on Saturday evening, securing a 3-2 aggregate triumph to win the regional title.