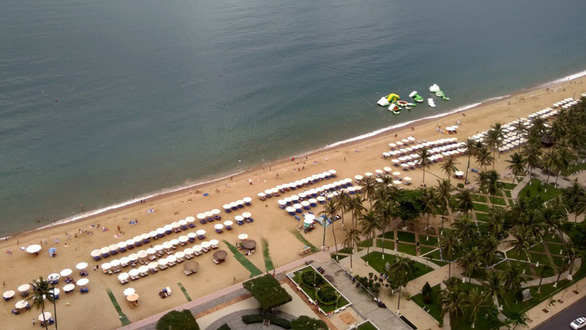 Authorities in Nha Trang, a resort city in the south-central Vietnamese province of Khanh Hoa, have approved a plan to lower the number of rental chairs and umbrellas along local beaches to ensure sufficient space for residents and tourists.

The municipal People’s Committee has recently announced the decision after examining the current situation and collecting feedback on the scheme.

The administration has signed deals with 46 businesses since 2013, allowing them to rent out a total of 680 umbrellas and 1,360 chairs in a combined area of 15,200 square meters at Tran Phu and Pham Van Dong Beaches.

The People’s Committee said the numbers are rather high and the objects have taken up a lot of public space.

Some of the firms did not follow regulations as they operated the rental services, which negatively affected the environment and cityscape.

According to the newly-approved plan, the total area for such rental services will be narrowed down to 11,400 square meters.

The number of umbrellas for lease will be 300, decreasing by nearly 60 percent.

All of the rental chairs and umbrellas have to meet general standards in terms of size, height, and color.

The umbrellas must have the logos of corresponding businesses and must be numbered.

Service operators are not allowed to set up fences around their rental areas, kiosks or any other type of object that obstructs local residents and tourists.

They are also banned from advertising and promoting commercial products on the beaches.

According to Ngo Khac Thinh, deputy head of Nha Trang’s Urban Management Office, the scheme is aimed at providing more space for the community as well as for visitors.

“People come to the beach to swim, sunbathe, and have fun, thus sufficient public space has to be ensured,” Thinh stated.