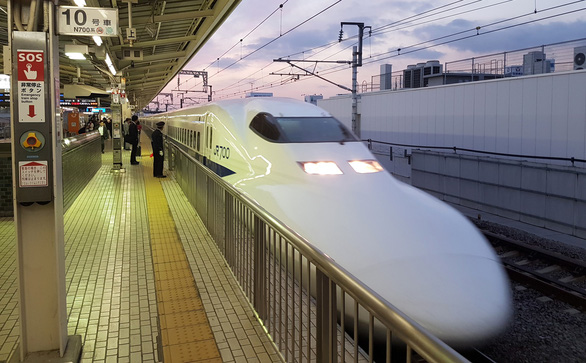 The management authority of rail projects in Vietnam has unveiled an ambitious plan to develop a high-speed rail that connects Hanoi and Ho Chi Minh City, shortening rail travel time to under six hours.

The bullet train will travel 1,559 kilometers across twenty Vietnamese cities and provinces on a separate track from the country’s existing north-south railway line, according to a pre-feasibility study report submitted to the Ministry of Transport.

The high-speed rail route will be operated by electric multiple unit (EMU) trains, which will be able to reach a maximum speed of 350 kilometers per hour, while their average commercial speed will be around 320km/h.

An EMU requires no separate locomotive, as electric traction motors are incorporated within one or a number of the carriages.

There will be 24 stations, five depots and 42 maintenance facilities along the entire length of the proposed railway line, with a possibility of adding three additional stations if necessary, according to the report.

With two minutes of stoppage time at each intermediate station, the high-speed train will travel from Hanoi to Ho Chi Minh City in six hours and 50 minutes if it stops at all stations.

If the train only stops at major stations, the travel time will be significantly reduced to just five hours and 17 minutes.

The project is proposed to be developed in two phases lasting 25 years in total, starting in 2020 and ending in 2045.

It will cost a whopping VND1.35 quadrillion (US$58.7 billion) to develop, including $2.23 billion spent on site clearance.

State budgets will cover at least 80 percent of the project’s total investment capital, with the remaining being raised from the private sector under the public-private partnership (PPP) model, according to the report.

“Considering Vietnam’s economic growth rate, the capital can be raised to invest on this project without causing too much impact on budget allocation for basic infrastructure and other social investments, as well as on public debt,” the report assesses.

Nearly 14,000 skilled workers in different fields will be needed to develop and operate this modern train project, the first of its kind in Vietnam.

The transport ministry will first have a look at the report before submitting it to a state council for evaluation, a process that can last until April 2019.

From May to July 2019, the transport ministry will be tasked with conducting a feasibility study on the plan and compile a report to be submitted to the central government in August 2019.

The government is expected to seek in-principle approval for the project from Vietnam’s lawmaking National Assembly at the legislature’s plenum in October 2019.

The current fastest train in Vietnam takes 31 hours and 20 minutes to travel the same distance from Hanoi to Ho Chi Minh City, according to a January 2017 article in Thanh Nien (Young People) newspaper.