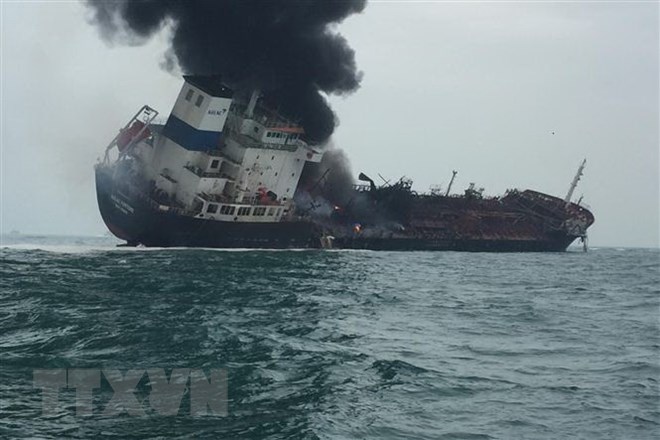 A Vietnamese oil tanker caught fire off the coast of Hong Kong on Tuesday morning, killing one crew member and leaving two others unaccounted for, Vietnam’s Ministry of Foreign Affairs reported.

The Aulac Fortune vessel was carrying 25 Vietnamese crew members prior to the incident, the Vietnam News Agency said, citing the foreign ministry.

The fire broke out when the 17,500 metric ton tanker was being refueled by an oil barge about one nautical mile south of Lamma Island off southern Hong Kong at around 11:30 am.

One sailor died and two remained nowhere to be found, while three others were injured.

Hong Kong authorities deployed three rescue vessels and three high-speed canoes to the scene to put out the flame.

The Vietnamese Consulate General in Hong Kong and Macao has asked Hong Kong authorities to conduct urgent search for the missing crewmen and offer medical treatment to the injured.

The foreign ministry assigned the consulate general to maintain close contact with local authorities to update information and take necessary measures to protect the legitimate rights and interests of crew members.

A representative of Ho Chi Minh City-based Au Lac JSC, which specializes in maritime transport, confirmed to Tuoi Tre (Youth) newspaper on the afternoon of the same day that the tanker belongs to the firm.

The company is working closely with Hong Kong authorities to determine the cause of the incident.

Prior to the accident, the Aulac Fortune docked in Dongguan port in Guangdong, China before leaving at 6:00 pm on Monday.