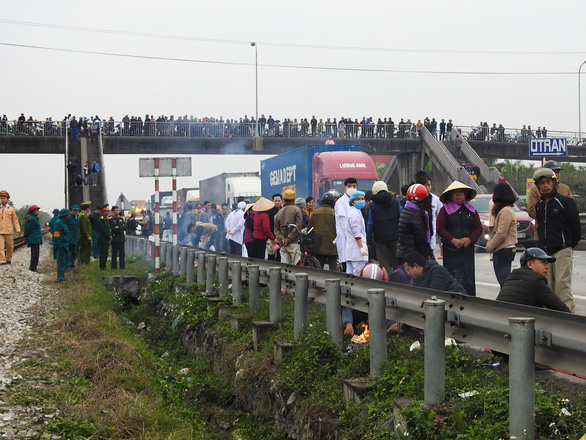 Authorities in Hanoi have revoked the business license of a local company after one of its truck drivers caused a deadly crash that killed eight people in the northern province of Hai Duong earlier this week.

The municipal Department of Transport on Tuesday decided to take away the transport business license of NewPro Production and Commercial JSC, based in Ha Dong District, Hanoi, for three months following the serious crash.

The permit was previously issued on December 14, 2016.

Founded in 2011, NewPro specializes in the production of paint, varnish, ink, and mastic, but goods transport is also among the firm’s various lines of business.

The revocation came after 28-year-old Luong Van Tam, one of the company’s drivers, crashed his truck into a group of cemetery goers, most of whom were local officials and veterans, along a section of National Highway 5 in Kim Luong Commune, Kim Thanh District, Hai Duong Province on Monday afternoon.

Seven victims died on the spot, another succumbed to serious injuries at the hospital, and eight others were injured following the crash.

Tam later turned himself in and was asked to undergo a quick examination at a local medical center, whose result showed that he tested positive for drugs.

Officers also discovered that data of the truck’s black box was not transmitted to the Directorate for Roads of Vietnam (DRVN) in accordance with regulations.

The DRVN has asked the Hanoi transport department to make a comprehensive inspection of the driving school that trained Tam and the agency that tested and granted him his driver’s license.

At the police bureau in Kim Thanh District, Hai Duong on Tuesday, Tam admitted he had consumed crystal meth several days prior to the crash, but was unable to provide the exact date.

He and two driver assistants were transporting goods from Hanoi to nearby Hai Phong City that day, Tam continued, adding that he was exhausted and fell asleep before slamming into the group of pedestrians, who were walking along the edge of the road that had no sidewalk toward a footbridge.