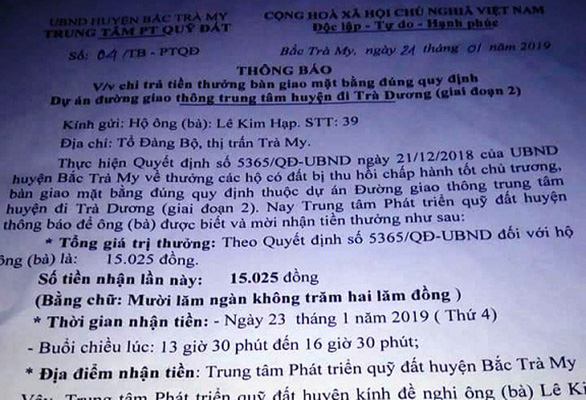 Officials in a mountainous district in Quang Nam Province, located in central Vietnam, have raised eyebrows after they rewarded a local family with VND15,025 (US$0.65) for handing over their estate to authority in line with a site clearance order.

The Land Fund Development Center of Bac Tra My District in Quang Nam announced on Monday that the family of local resident Le Kim Hap had been awarded VND15,025 in return for good compliance with an order to clear the site of their house, according to a photo of the announcement uploaded online.

The reward was pursuant to a previous decision by the administration of Bac Tra My District on rewarding households that comply with the site clearance request, which is necessary for construction of a public road.

Hap’s family was asked to be present at the headquarters of the Land Fund Development Center on Wednesday afternoon to collect their reward.

The ridiculously low reward has become a laughing stock for netizens in Vietnam, who criticize local officials for their rigidity when implementing regulations.

“This deserves to be the joke of the century,” wrote Doan Thanh Van, a Tuoi Tre (Youth) newspaper reader, in the comment section of a Vietnamese article reporting on the news.

“How are they supposed to pay out VND25 in cash?” Nghia, another reader, commented.

The smallest denomination of a Vietnamese banknote that remains in circulation is VND200.

Dang Cong Tu, deputy director of the Land Fund Development Center of Bac Tra My District, has confirmed that the announcement as seen online is authentic and that the money awarded to the family of resident Le Kim Hap is indeed VND15,025.

The reward is equal to five percent of the compensation Hap’s family received from the land clearance as stipulated in a decision issued by the provincial administration on rewarding cooperative households, Tu explained.

Even though the reward in Hap’s case is small, officials are still compelled to make the payout in accordance with the regulations, Tu said.

“Rewards range from a few thousand to millions of Vietnamese dong [VND1 million = $43.15], depending on the compensation each family is eligible for,” he added.

“We have asked the provincial government many times to reconsider their rewarding policies,” Tu said.