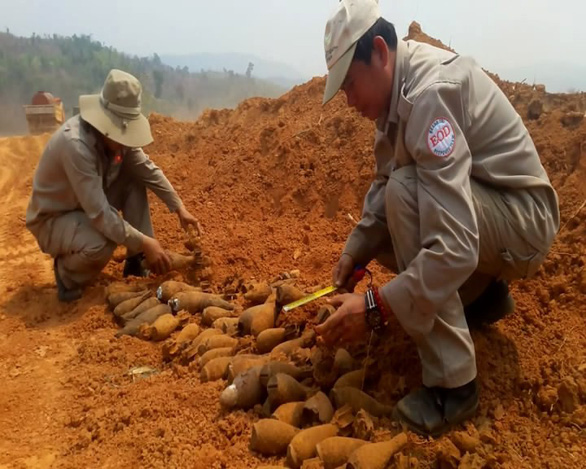 A bunker filled with over 100 artillery shells were safely cleared by authorities in Quang Tri Province in north-central Vietnam on Thursday following a surprise discovery by a local farmer.

Nguyen Van Dung, a resident of Huong Hoa District in Quang Tri, came across an object that looked like an artillery shell while cultivating a piece of farmland to plant bananas the same day.

He immediately reported his finding to the local military command, which notified the provincial mobile bomb disposal squad to come and examine the area.

After some excavation works, the team discovered a bunker underneath the farmland and was able to unearth some 100 artillery shells of various types and sizes, many of which were unexploded.

On the same day, all of the ordnances were relocated to a safe site for disposal.

Quang Tri suffers from Vietnam’s worst contamination of explosive remnants of the American war that ended in 1975.

More than 80 percent of the province’s total area is contaminated by unexploded bombs, according to statistics from the Vietnamese Ministry of National Defense.

The ministry estimates that it would take Quang Tri approximately three centuries to completely remove all unexploded ordnances left from the war.