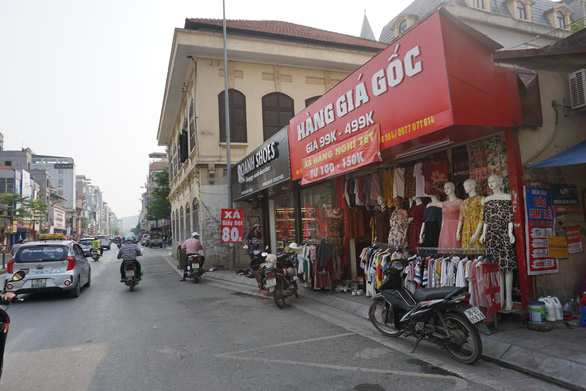 In Hanoi, many houses can be seen encroaching on local sidewalks, either partially or entirely, leaving no space for pedestrians, while authorities are scratching their heads over the issue.

The municipal People’s Committee has been exerting efforts to clear promenades across the city to ensure public space for pedestrians and urban esthetics.

However, they seem to be helpless against the houses and stores that have already been built over the sidewalks.

According to the observation of Tuoi Tre (Youth) newspaper reporters on Ton Duc Thang Street in Dong Da District, a shop selling bed sheets and pillows is erected on the entire footpath and even a small part of the roadway.

People would have a hard time walking on this section of the street.

This is the result of a previous road expansion, a local resident said, adding that the owner of the house did not agree on the amount of compensation from local authorities, thus refusing to remove this part of the structure.

A similar situation can also be spotted on Nguyen Phong Sac Street in Cau Giay District, as well as Quoc Tu Giam and Xa Dan Streets in Dong Da District.

It is difficult to deal with such cases as the owners have legitimate paperwork proving their ownership of the properties, a local official stated.

They did not cooperate with the authorities during the expansion of these roads, so the structures ended staying on the promenades, he added.

Sydney is set to record its wettest year in 164 years