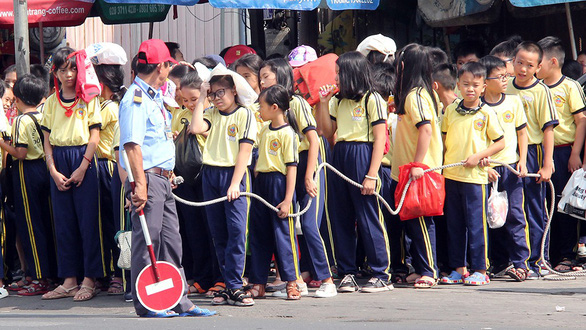 People in Ho Chi Minh City and other localities in southern Vietnam have been sweltering through blistering weather over the last few days, as the dry season is reaching its peak in the region.

The weather pattern has been roasting southern localities and is expected to become more intense in the upcoming days, according to the southern hydro-meteorological station.

There will be unseasonal rains for about two days at the end of March.

An unseasonal rain occurred in Ho Chi Minh City and some southern provinces on Sunday morning, but it only lasted 10 to 15 minutes and did nothing to cool down the atmosphere.

According to Le Dinh Quyet, an official from the southern weather station, temperatures in the region over the past weeks were still lower than last year’s highest, which was 38.1 degrees Celsius in Bien Hoa, the capital of Dong Nai Province, which borders Ho Chi Minh City.

But Quyet said the current sweltering weather is already taking a toll on local residents, with mercury hovering above 30 degrees Celsius from 9:00 am to 5:30 pm.

“The hot weather may linger up to 8:00 pm on some occasions, which can be quite unpleasant for local residents,” he said.

Dr. Le Duc Tho, a dermatologist, warned that UV Index in Ho Chi Minh City has been at a high level, which can be dangerous to human health.

It is recommended that people wear protective clothing, sunglasses, and sunscreen when outside during the day, he said.

The spell of baking weather has negatively impacted the lives and production of people in the region.

In Ho Chi Minh City, air-conditioned cafés and shopping malls have been increasingly packed with customers, especially in the afternoon.

“It can be really hot and uncomfortable at noon even though I turn on two electric fans.”

Thang added he often goes to his school campus or local coffee and milk tea shops to shelter from the heat.

In the Mekong Delta, many farms and reservoirs are drying out, according to the observation of Tuoi Tre (Youth) newspaper reporters.

Tran Van Anh, a farmer in Soc Trang Province, said that production cost for his veggie farm has doubled compared to the rainy season, as he has to spend extra money on water pumps and pest prevention.

In Ca Mau Province, water levels in many reservoirs are currently low, posing a high risk of water deprivation for local residents if the situation persists.

Provincial authorities have been on duty around the clock to promptly deal with any fire at the U Minh Ha National Park.

Meanwhile, the number of young patients with respiratory diseases has been rising due to the boiling weather in the Mekong Delta hub of Can Tho, according to Dr. Tran Van De, director of the city’s children’s hospital.