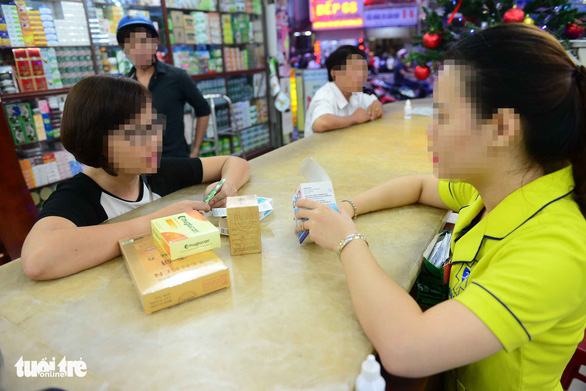 Ho Chi Minh City has launched a campaign this month to tighten control over sales of prescription drugs at local pharmacies to squash the widespread non-prescribed use of medications, especially antibiotics.

The campaign begins in Phu Nhuan District with a plan to extend its reach to the entire southern metropolis by the end of 2020.

Between April and October 2019, municipal health department officials will conduct surveys on the sale of prescription drugs at all local pharmacies in Phu Nhuan by interviewing pharmacists and customers.

Over 580 prescriptions issued by doctors at both public and private hospitals and clinics will also be evaluated.

The campaign is expected to lower risks of improving bacteria’s resistance to antibiotics, according to the municipal health department.

Although antibiotics are prescription drugs, purchasing the medicines is extremely easy in Vietnam without the need for prescriptions.

At a pharmacy on Phan Dinh Phung Street in Phu Nhuan on Sunday, a man could be spotted buying two packs of Amoxicillin Oral, a penicillin-type antibiotic, for VND32,000 (US$1.38) without producing a doctor’s prescription.

“It’s against the regulations [for us] to sell you the medications this way,” a female pharmacist admitted.

At another big pharmacy in the same district, pharmacists took it upon themselves to prescribe drugs for customers after listening to their symptoms.

Only around 6,480, or 72 percent, of pharmacies in Ho Chi Minh City are currently connected to a national pharmaceutical database system run by the Ministry of Health, despite a goal by the city’s health officials to achieve 100 percent by March 31.

By joining this system, pharmacies put themselves under close watch by authorities in terms of the quantity and type of drugs they sell, making it easier to control sales of prescription drugs.

“In April, we will continue to inspect local pharmacies and order a halt to the operations of those that fail to connect to the national database,” said Do Van Dung, head of the pharmaceutical division under the municipal health department.

The World Health Organization (WHO) ranks Vietnam among countries with the highest rate of antibiotic resistance.

It estimated in 2017 that 88-91 percent of antibiotics sold in Vietnam did not need a doctor’s prescription.