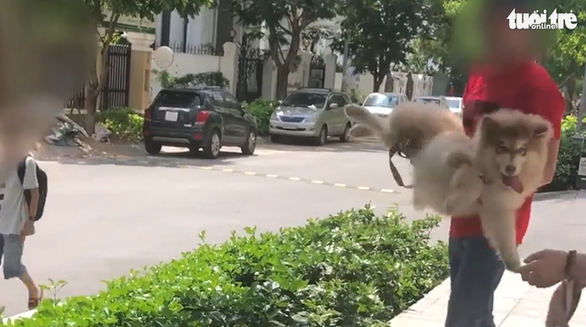 A Viet Kieu man has expressed his apologies to two security guards at an apartment complex in Ho Chi Minh City for his disrespectful behaviors during their argument over the man’s dogs.

Phe, 54, and Thai, 60, are employees of Yuki Sepre 24 Security Services Company, who are tasked with guarding the Lacasa Apartment Complex in District 7.

A heated argument broke out between Dai, from Canada, and the two security guards as he and his girlfriend walked their two dogs into the premises of the apartment complex last week.

The dogs appeared to have relieved themselves on the lawn, before the guards voiced their objection.

In the footage, which has gone viral on social media since Sunday, Dai was seen yelling at Phe and Thai, as well as other bystanders.

“I don’t have to talk to you people. My dogs need to be in an air-conditioned room and I’m going to take them home first,” Dai said in an offensive tone.

“You cannot keep me here. What kind of proof do you have against me, old man?” he shouted at one of the guards.

After an officer of the ward-level police unit arrived, the Viet Kieu man was still aggressive and insisted he did nothing wrong.

In his apology, Dai said police officers had helped him understand his fault as well as the entire situation.On Monday morning, Dai was summoned to the local police station to pay his fine, as the dogs did not wear a muzzle pursuant to the law.

“I just came back to Vietnam 10 days ago and was not aware of the law regarding my pets. I was also hot-headed at that time, which explained my bad manners,” the man stated.

The security guards accepted his apologies, saying what mattered was Dai had acknowledged his wrongdoing and was willing to make amends.