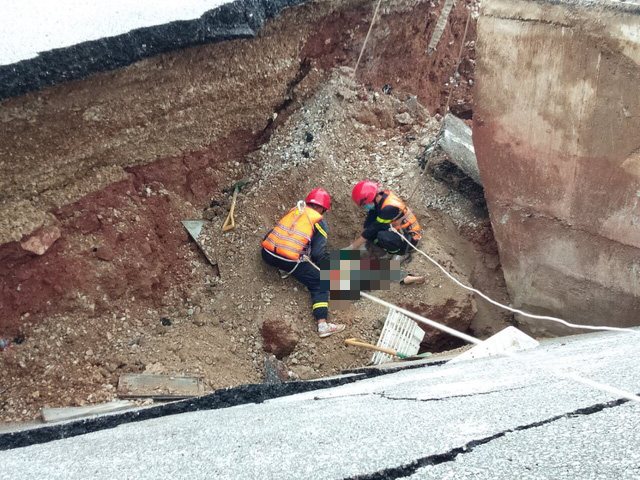 Two people were killed in north-central Vietnam on Thursday morning when massive rain brought about by Tropical Storm Mun caused a street in Thanh Hoa Province to collapse.

Most of the victims had to be recovered from under the rubble, according to local police officers.

Rescuers were promptly dispatched to the scene to transport critically injured victims to the hospital and retrieve the bodies of the deceased.

Tropical Storm Mun, the second to hit Vietnam this year, made landfall between Hai Phong City and Nam Dinh Province in the northern region at around 4:30 am on Thursday, the National Center for Hydro-meteorological Forecasting reported.

The tropical storm unleashed winds of 70 to 75km per hour and gusts of up to 115km an hour before weakening into a tropical depression over the Red River Delta by 7:00 am that same day. By mid-morning, average wind speed had decreased to 40-50km per hour.

Meteorologists forecast the depression to continue forging ahead on its northwesterly route while it keeps being downgraded to a low-pressure zone over the next six hours.

By the end of Thursday, over 150 millimeters of rain is expected to have fallen in several localities in the northern region, including Hanoi.

Provinces in north-central Vietnam, including Thanh Hoa, Nghe An, and Ha Tinh, are also expected to find relief from the storm by Thursday evening.

According to Nguyen Van Huong, an official at the National Center for Hydro-meteorological Forecasting, the torrential rains will significantly increase the risk of mudslides and flashfloods in north-central localities as the region had just been impacted by a heatwave.

Aside from Thanh Hoa Province, no other localities have reported storm-related casualties.

Strong gusts, however, uprooted about 10 trees and knocked down a billboard in Hai Phong City. Power outages also occurred in some neighborhoods in the city.