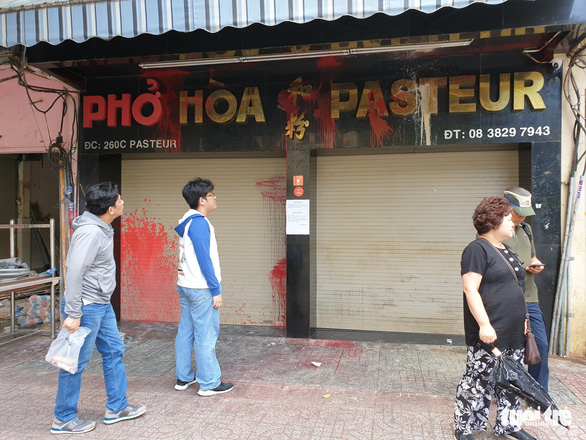 A popular Saigon restaurant known for its ‘pho,' Vietnam’s iconic beef noodle soup, is temporarily closing its doors to patrons following a series of attacks on its diners and staff.

Pho Hoa Pasteur in District 3, Ho Chi Minh City, has been the victim of eight attacks since the beginning of July, according to a report filed by the venue’s owner on Wednesday, District 3 Police told Tuoi Tre (Youth) newspaper the same day.

In CCTV footage of one of the attacks supplied to Tuoi Tre by Pho Hoa Pasteur’s owner, a group of men appeared to be throwing a variety of substances, purportedly red paint, pig organs, and shrimp paste – a fermented condiment with a strong smell – at the restaurant.

The attacks took place both during opening hours and at night after the restaurant had already closed, according to the report.

Diners sitting inside were hit by the substances during some of the attacks and the restaurant was repeatedly forced to close so that staff could clean food preparation areas contaminated by the filth, Pho Hoa Pasteur’s owner said, adding that business has been greatly affected and his own family members are afraid of going outside for fear of being attacked.

As of Thursday the restaurant had been temporarily shuttered for “construction," according to an announcement seen outside the store.

“Due to interior construction, we temporarily close for a short time [sic],” the announcement states in both Vietnamese and English.

“We are terribly sorry for the inconvenience it may cause to you and greatly appreciate your understanding and support,” the announcement continues.

Pho Hoa Pasteur’s owner told Tuoi Tre he suspects the vandals to be debt collectors who want to terrorize his family into paying his brother-in-law’s overdue debts, which he says have amounted to over VND8 billion (US$340,000).

The brother-in-law runs a mobile phone and automobile accessory store adjacent to the Pho Hoa Pasteur premises and has been avoiding creditors, he said.

“Nobody knows where [my brother-in-law] is. We haven’t been able to reach him,” the owner said, adding that he filed a police report after each incident but the attacks still seem to have persisted.

District 3 Police said they have assigned the case to their investigative unit.

Established in the late 1960s, Pho Hoa Pasteur is one of the most popular pho restaurants in Ho Chi Minh City, especially among foreign visitors to the southern metropolis.

It has been awarded the Certificate of Excellence by travel website TripAdvisor each year since 2015 and its average rating is 4.5/5 based on over 1,000 reviews on the site.