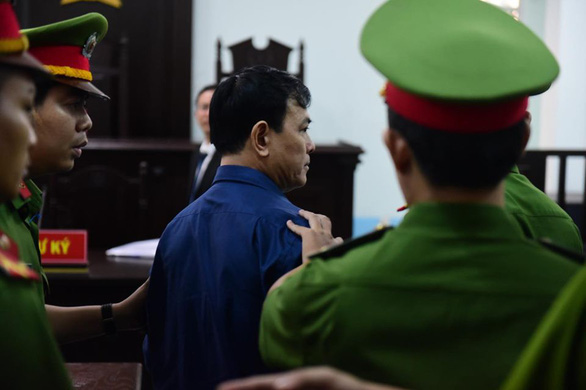 A court in Ho Chi Minh City on Friday handed a prison term of 18 months to a former Vietnamese procuracy official found guilty of molesting a child inside an elevator in April.

Nguyen Huu Linh, a retired procuracy official from the central city of Da Nang, grabbed and kissed a young girl, reported to be seven years old, inside an elevator at the Galaxy 9 apartment building in Ho Chi Minh City on April 1, CCTV footage showed.

Linh, 61, was visiting a relative in the apartment building in District 4 on the day of the incident.

Although Linh’s back was turned to the camera, obscuring his left hand which was positioned in front of the young girl, judges decided it was enough evidence to convict him of molesting an under-16-year-old person and sentenced the ex-official to 18 months behind bars for the crime.

The crime carries a maximum prison term of three years, according to the Penal Code of Vietnam.

Linh appealed the court ruling immediately after the trial, insisting that his action did not constitute child molestation, his attorney Tran Ba Hoc said.

A mass call for action to be taken against Linh previously ripped through the country after the CCTV footage went viral on social media.

In late May, the People’s Procuracy in District 4 officially charged Linh with molesting a child under the age of 16. He was placed under house arrest in Hai Chau District, Da Nang.

At his first trial on June 25, Linh was allowed to leave after the court decided to return the case file to prosecutors so that a further probe could be conducted to determine whether Linh’s left hand touched any sensitive front parts of the girl.

The act of kissing the cheek of a child is not clearly described in Vietnamese legislation as child molestation, Hoc argued after today’s court.

The attorney was reiterating an argument he had advanced following a decision by police in District 4 in July that they found insufficient grounds to conclude whether Linh had molested the girl or not.

According to a 1998 circular issued by the People’s Supreme Court and the People's Supreme Procuracy of Vietnam, a person is guilty of child molestation if they commit such acts as “grabbing and touching erogenous parts of a child” or forcing a child to perform those actions upon them, the lawyer said, adding that his client should be given the benefit of the doubt and freed of the child molestation charge.

Nguyen Huu Linh flees reporters as he made his way to the courtroom for his first trial in District 4, Ho Chi Minh City on June 25, 2019. Video: Tuoi Tre

In early August, the court of District 4 said it was handling the case again, before announcing on August 13 that a second trial would be opened on August 23, with a different chief judge in charge of hearing Linh's case.

Prosecutors maintained that Linh’s behavior posed a danger to society, hurt the dignity of a person under 16 years old, and adversely affected public security and order. They sought a strict criminal charge against Linh to set an example to others.

The chief judge in charge of the case was replaced after the first trial.

The victim’s family said prior to the June trial that they would prefer criminal charges not to be brought against Linh, instead stating they only wanted a formal apology, explaining that the girl was not harmed.