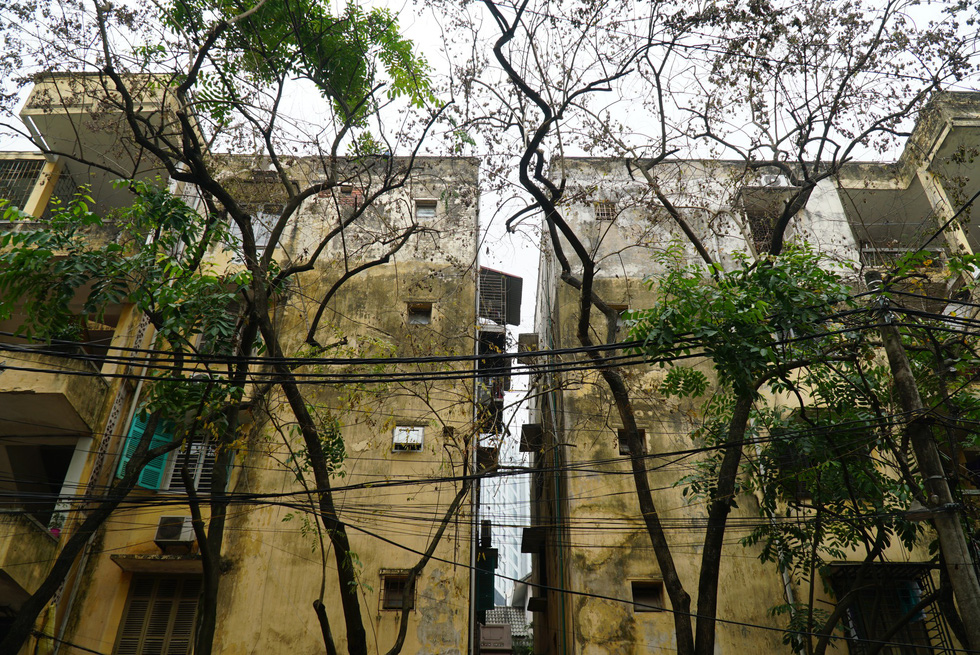 A row of decades-old trees in a neighborhood in Hanoi has apparently been poisoned as they suddenly lost most of their leaves and started to wither over the past week.

The sua trees, which are nearly three decades old, at a collective housing unit in Co Nhue 1 Ward, Bac Tu Liem District began losing some of their leaves on Monday last week.

Residents in the collective housing unit did not pay much attention, thinking it was a normal phenomenon during this time of the year, until the number of fallen leaves increased significantly a few days later.

As locals dug up the soil around the trees, they scented a vile smell of chemicals, said H., who lives in the neighborhood.

“The trees lost their green leaves first, followed by the yellow ones,” said Phan Tu Bang, another resident.

“This is not normal at all, as usually trees would shed their yellow leaves first.”

Local residents have been digging up the soil and water it to wash away the chemicals, but the ‘rescue efforts’ did not seem to be effective.

According to the observation of Tuoi Tre (Youth) newspaper reporters on Monday, the roots of the trees had an abnormally dark color, while most of their leaves had already fallen and many branches withered.

Many of the remaining leaves on the branches have wilted and burned.

Sua, scientifically known as dalbergia tonkinensis, is a species of legume in the family Fabaceae.

Sua trees are sought after in China and Vietnam as their timber is highly prized.

The sua tree is also listed as an endangered species in Vietnam due to overexploitation for timber.

According to Dan Tri online newspaper, several groups of people wanted to buy the trees at the collective housing unit in 2018, but both local residents and authorities did not agree to sell them.

Officers in Co Nhue 1 Ward have examined the trees and will report the case to the police unit in Bac Tu Liem District for further verification.