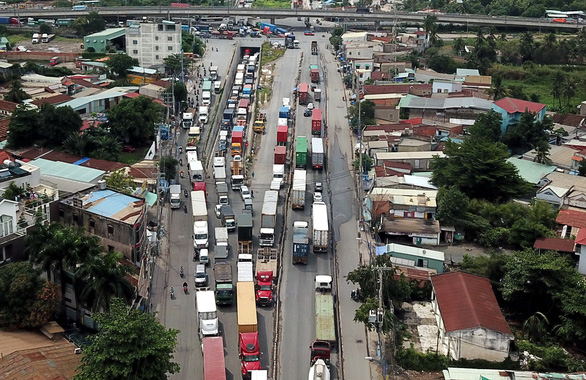 The operator of a major seaport in Ho Chi Minh City has proposed enacting multiple measures, including lifting a restriction on the number of ships making port calls there, to expand its capacity, sparking concerns that doing so would only exacerbate the already terrible traffic around the facility.

Cat Lai Port, located in District 2, received 66.3 million metric tons of goods in 2018, accounting for about 40 percent of the country’s total amount of containerized cargo through seaports.

As a large number of tractor-trailers travel in and out of the seaport on a daily basis, serious congestion often occurs along nearby roads, namely Hanoi Highway, Mai Chi Tho, Dong Van Cong, and Nguyen Thi Dinh.

The completion of the first phase of the My Thuy traffic knot project in the area in June 2018 did help alleviate the gridlock, but the improvement was not significant.

In order to cope with the situation, the Vietnam Maritime Administration (Vinamarine) has requested that other seaports in the southern provinces of Dong Nai and Ba Ria-Vung Tau, both bordering Ho Chi Minh City, share the pressure with Cat Lai.

Specifically, Vinamarine asks that 81 container ships at most should be allowed to enter Cat Lai a week.

In the meantime, the application of information technology has also helped speed up multiple procedures at Cat Lai, and thus lowered the risks of congestion.

Saigon Newport Corporation, which manages Cat Lai Port, believed that since traffic around the port has been put under control, it is no longer necessary to restrict the facility from operating to its full capacity.

The company has therefore proposed the removal of the restriction, as well as demanding that the seaport be allowed to receive ships weighing over 45,000 metric tons.

However, Bui Hoa An, deputy director of the Ho Chi Minh City Department of Transport, was concerned by the proposal.

An said the area surrounding Cat Lai Port is still at high risk of congestion due to the lack of synchronization in traffic infrastructure improvement.

Traffic jams still occur at the entrance to Cat Lai as the infrastructure has failed to keep up with the rising number of vehicles traveling to and from the seaport.

For instance, the number of tractor-trailers traveling daily on Nguyen Thi Dinh, the road leading to the entrance of the port, is now two times the capacity of the road, An elaborated.

The official thus suggested that Vinamarine should carefully consider whether to approve the proposal of the Saigon Newport Corporation.

Many traffic infrastructure projects in the Cat Lai area are still on hold due to complicated procedures, according to the city’s management board of investment projects.

The expansion of Dong Van Cong, for example, is not going to begin until the end of this year.

Work on the My Thuy 3 Bridge is also scheduled to commence in late 2019, while other projects are expected to be initiated in 2020.

The construction of a street connecting Cat Lai Port and Ring Road 2 is pending directions from the municipal administration.

All of these projects are expected to complete in 2022 if there is no problem regarding site clearance.

Regarding long-term solutions, the municipal transport department has proposed the establishment of a railway reserved for the transport of shipping containers between Cat Lai and other transport hubs in the area.