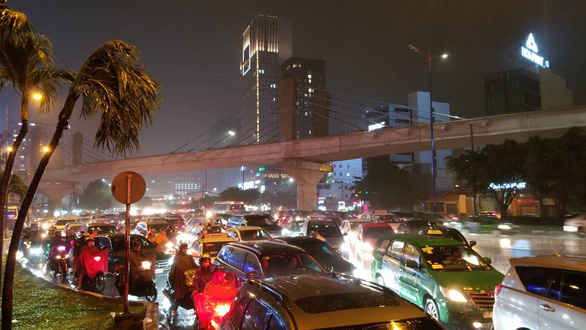 A downpour dampened Ho Chi Minh City on Saturday evening and resulted in inundation and congestion in multiple neighborhoods, while rain is forecast to continue on Sunday.

According to the observation of Tuoi Tre (Youth) newspaper reporters, flooding occurred along various streets in District 2 and Binh Thanh District.

On Nguyen Huu Canh Street in Binh Thanh, inundation was still serious even though the rain had stopped for nearly one hour.

Some parts of the road were submerged under one-meter-deep water.

The situation led to a traffic jam as commuters parked their motorbikes under an overpass to avoid the downpour, while others had to push their vehicles after they broke down.

“We had to wait till rainwater receded to continue our journey,” a resident stated.

Aside from Ho Chi Minh City, other provinces in southern Vietnam and the Central Highlands were also lashed by torrential rain on Saturday, the National Center for Hydro-meteorological Forecasting reported.

A rainfall of 40 to 70 millimeters per 24 hours is expected to continue hitting the regions on Sunday.

Downpours with milder intensity will also occur on the south-central coast.