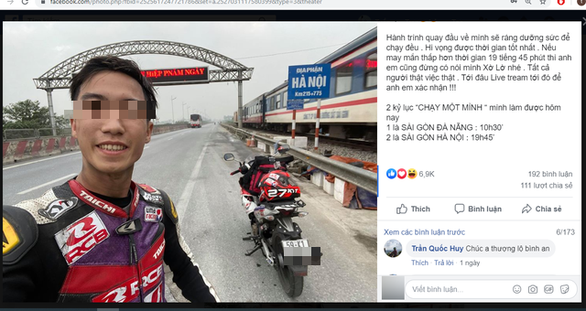 Vietnam man faces run-in with law for allegedly traveling 1,700km in under 20 hours on bike

The National Traffic Safety Committee has requested the Traffic Police Department under the Ministry of Public Security to inspect and verify the case of a young Vietnamese man who claims to have ridden a motorbike for 1,700 kilometers from Ho Chi Minh City to Hanoi in less than 20 hours.

Photos chronicling the dangerous trip were constantly uploaded on the Facebook account named To Ha Dong Nghi between December 17 and 19.

In the captions of these photos, the owner of the account claimed to have completed the 3,600-kilometer round trip between Ho Chi Minh City and Hanoi in 19 hours 45 minutes each leg, including time for short rests, refueling, and personal hygiene.

“[I am now] 25 years old and have just completed my trip across Vietnam, this time full of speed and in 19 hours 45 minutes from [Ho Chi Minh City] to Hanoi,” a post on the account To Ha Dong Nghi reads.

Nghi continuously gave updates on his whereabouts whenever he reached a milestone during the three days.

Each of these posts received up to 13,000 likes and reactions and hundreds of comments on the social media platform.

Many commenters wrote that it takes about 54 hours to complete such a 3,600km distance at the speed of approximately 66 km/h, without any break.

And to race 1,700 kilometers from Ho Chi Minh City to Hanoi in less than 20 hours, one needs to ride their motorbike nonstop at the average speed of 85 km/h.

Therefore, the young man in question apparently disregarded the regulations, imposing serious threats on other public traffic participants if his claims were true.

The National Traffic Safety Committee has asked the Traffic Police Department to strictly handle the violation if it is proved genuine.