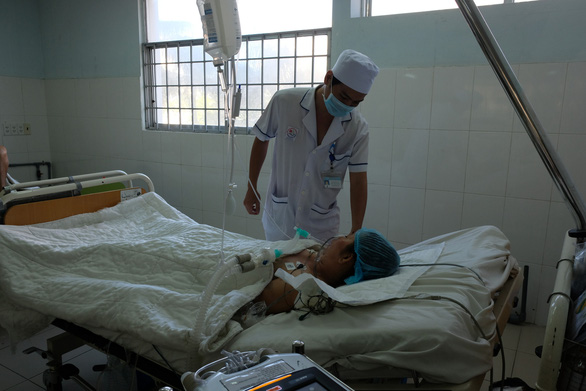 A Vietnamese woman in Nha Trang City, the capital of the south-central province of Khanh Hoa, has fortunately overcome a trauma after she got poisoned from eating an unusual kind of snail.

Nguyen Thi T., 46, suffered from numbness in her limbs, falling into a deep coma followed by a cardiac arrest two hours after she had eaten seven strange snails caught by her family from the sea last week.

“The patient was in a critical condition with no pulse and no blood pressure when she was taken here, although her heart rate had returned thanks to emergency treatment on the way,” a doctor at the hospital’s Department of Intensive Care and Anti-Poison said.

Doctors in the department promptly performed dialysis as the patient showed signs of acute kidney failure.

“This is a very rare case as such diseases progress so quickly that few patients can make it to the hospital,” the doctor said.

Nguyen Luong Ky, head of the Department of Intensive Care and Anti-Poison at the Khanh Hoa General Hospital, said on Friday that the patient had regained consciousness, and her health is now in stable conditions.

She has been transfered to the department of general neuroscience for further treatment, Ky added.

The kind of snail T. consumed is nassa mud snail, a genus of minute to medium-sized sea snails.

Some members of her family also ate the snails, but none of them got poisoned, except T.

When this kind of snail happens to get in on their batches of fish, most local fishermen throw them away as some death cases have previously resulted from eating the snails.

According to doctor Ky, a parasite that contains tetrodotoxin, a powerful neurotoxin, often lives in nassa mud snails.

People can die within 30 minutes after eating this type of parasite unless they are given timely first aid, the doctor warned.

People should not eat such strange snails as nassa mud snails or those which have a history of poisoning their eaters, said Dr. Dao Viet Ha, director of the Institute of Oceanography in Nha Trang.