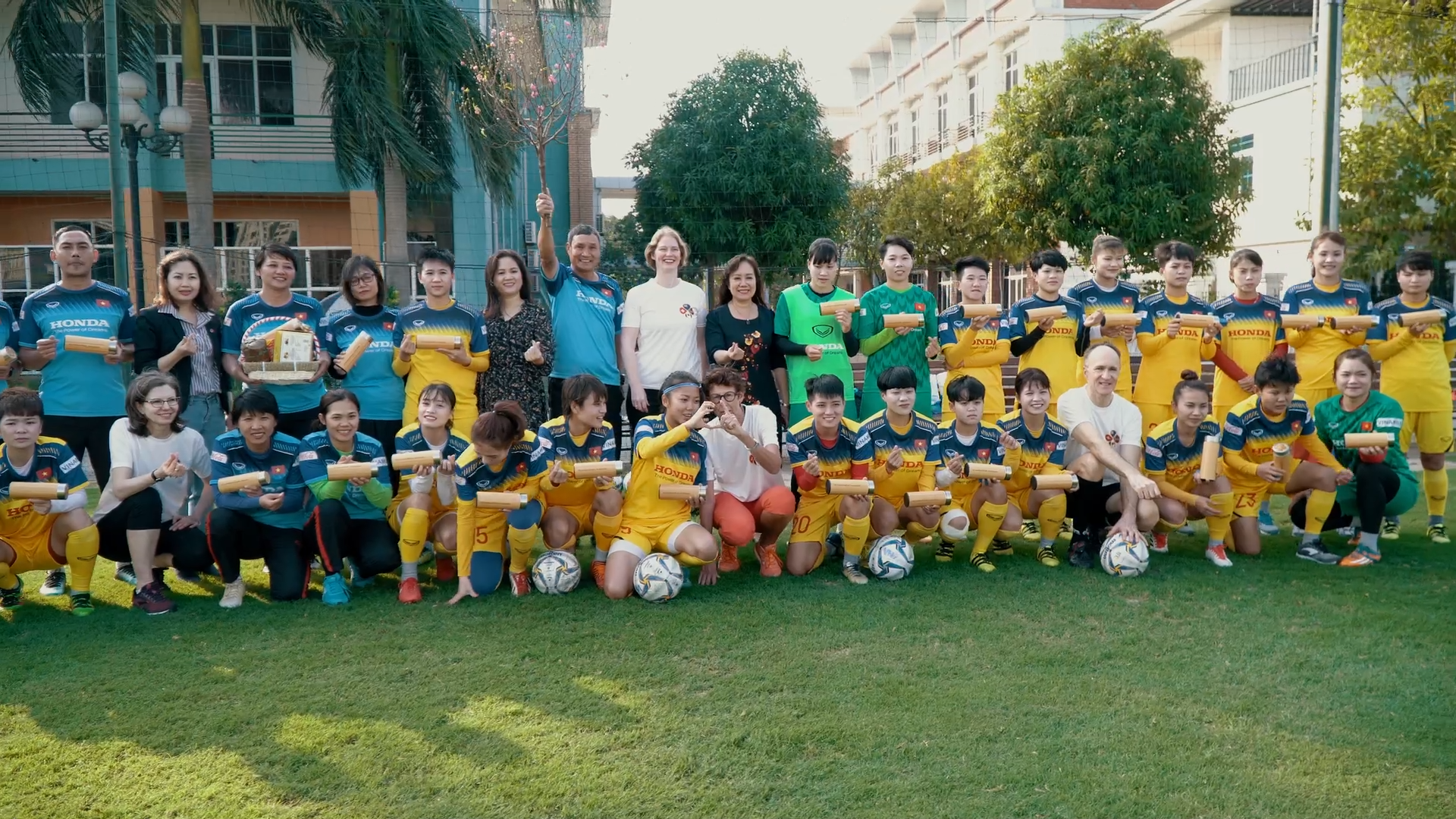 Ambassadors of the G4 countries New Zealand, Canada, Norway, and Switzerland in Vietnam have joined members of the women’s national football team in sending an empowering message to women and girls in the country on the occasion of Tet festival.

Tet, or Lunar New Year, is the biggest public holiday in Vietnam which will fall on January 25 this year.

With less than a week from the 2020 Lunar New Year, the ambassadors of New Zealand, Canada, Norway, and Switzerland recently visited the women’s national football team at the Vietnam Football Federation headquarters in Hanoi to extend their Tet greetings.

“I’m very happy to celebrate Tet with the Golden Girls of Vietnam’s football,” said Grete Lochen, Ambassador of Norway to Vietnam, in a video of the visit sent to the media on Monday.

“In many countries including my own, women’s football often struggles to make it into the spotlight, and there’s an ongoing challenge changing traditional views of women’s participation in football.”

Ambassadors of New Zealand, Canada, Norway, and Switzerland join players of the women’s national football team of Vietnam and their head coach in this videoed Tet message sent to the media on January 20, 2020.

The Golden Girls made history last month by winning their record sixth championship title in women’s football at the 30th Southeast Asian Games in the Philippines.

The team’s achievements “brought well-deserved attention and support from the Vietnamese and international community,” Lochen said.

Ambassador of Canada to Vietnam Deborah Paul said Tet is an occasion to reflect on the important contributions that head coach Mai Duc Chung and his colleagues have made to build “the most powerful women’s football team in all of Southeast Asia.”

Ambassador David Best of Switzerland said the female footballers have shown the country that women possess the qualities of teamwork, fighting spirit, confidence, self-esteem, passion, and pride “as much as men.”

Their success has turned them into role models for women and girls throughout the country, he added.

“Everybody deserves an opportunity to realize his or her dreams,” Ambassador Best stressed.

Ambassador of New Zealand to Vietnam Wendy Matthews noted that while “progress is being made” on gender issues in Vietnam, more work is needed “to ensure women and girls can truly thrive.”

“Positive female role models to look up to, and to learn from, make a difference, like the fantastic and talented soccer players here today,” Ambassador Matthews said.

“I will certainly be cheering for them.”

The football players and their coach also received a branch of peach blossoms - a common Tet ornamental plant in northern Vietnam - and reusable water bottles promoting the reduction of single-use plastics as gifts from the ambassadors.

The ambassadors joined the players in a friendly football match before standing together to say ‘Chuc mung nam moi’ (Happy New Year) to viewers in Vietnamese.