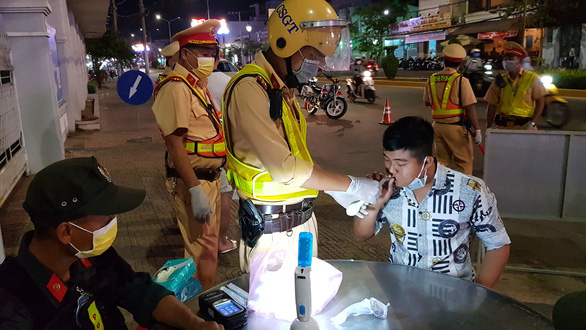 In Vietnam, drivers take breath tests by blowing into balloons amidst coronavirus scare

Police officers Vietnam’s Mekong Delta province of Soc Trang have come up with a new idea to test the blood alcohol content of suspected DUI drivers by asking them to blow into balloons, instead of directly into breathalyzers, to minimize risks of spreading the novel coronavirus (2019-nCoV).

Vietnam’s new drink-driving law, which took effect on January 1, stipulates that drivers must be completely sober, not having downed any amount of alcoholic drinks, while operating bicycles, motorbikes, automobiles, or any other vehicles on the road.

Since the effective date of the law, Vietnamese traffic police have set up checkpoints on many of the country’s streets to catch drunk drivers.

A simple breath test, where drivers are asked to blow into a device known as a breathalyzer through a plastic tube, can help determine whether there is any hint of alcohol in the person’s breath.

Although the tube is replaced after each use, there are concerns the device could still help transmit viruses from person to person.

To address these concerns, traffic police officers in Soc Trang Province have introduced a new breath-testing method where drivers are asked to blow up a balloon before the air inside the balloon is released into a breathalyzer for testing.

By handing a new balloon to each driver, close contact with the breathalyzer is avoided.

Pham Minh Kha, head of the provincial traffic police department, told Tuoi Tre (Youth) newspaper on Wednesday that the method has been approved by the police bureau’s board of directors.

According to Kha, police officers are trained to explain to drivers before applying this new method of breath testing.

Kha said that the traffic police in My Xuyen District were the first to try out the new method on Tuesday.

“The [provincial traffic police] department will hold a meeting to evaluate the advantages and disadvantages of this method after a trial period,” Kha said.

“The department will widely apply the method if it receives strong approval from the public."

“I feel more assured blowing into the balloon. I think the method should be widely applied,” said D., a driver who was tested by the traffic police in My Xuyen District on Tuesday.

The novel coronavirus, which first surfaced in the Chinese city of Wuhan in December 2019, has killed 492 people and infected more than 24,500 globally as of Wednesday.

It has spread across China and to around two dozen other countries and regions.