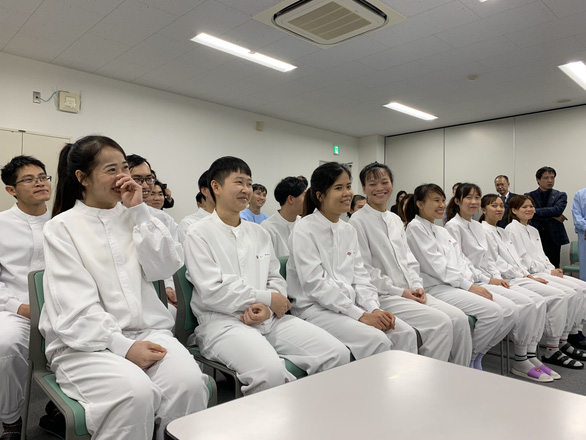 No Vietnamese worker infected with COVID-19 in S.Korea, Japan: embassies

The Labor Management Board under the Vietnamese Embassy in South Korea and its counterpart in Japan have reported no case of Vietnamese workers in the East Asian countries infected with the new coronavirus disease (COVID-19) as of Monday morning.

Nguyen Gia Liem, deputy general director of the Department of Overseas Labor Management under the Vietnamese Ministry of Labor, War Invalids and Social Affairs, confirmed the information to Tuoi Tre (Youth) newspaper on the same morning after a meeting on updates about Vietnamese workers in South Korea and Japan in light of unusual developments of the viral disease there.

The numbers of COVID-19 patients in these East Asian countries have shot up in recent days.

South Korea reported 161 new cases of the coronavirus, bringing the total number of infected patients in the country to 763, health authorities said on Monday, a day after the government raised its infectious disease alert to the highest level.

Meanwhile, authorities in Japan had confirmed 773 cases by early Sunday evening, most of them from a cruise ship quarantined near Tokyo.

According to Liem, above 59,000 Vietnamese currently work in South Korea, while the figure in Japan tops 220,000.

“The Department of Overseas Labor Management has insisted that the Labor Management Boards in South Korea and Japan closely follow up and give updates on the situation of Vietnamese workers there since the COVID-19 epidemic emerged in the Chinese city of Wuhan,” Liem told Tuoi Tre.

The two Labor Management Boards, as well as the Vietnamese Embassies in South Korea and Japan, have set up hotlines to provide help for Vietnamese migrant workers in the countries regarding COVID-19-related issues.

“According to the reports from the two Labor Management Boards and [information acquired] through diplomatic channels, we have not received reports of Vietnamese workers in Japan or South Korea being infected with COVID-19,” Liem affirmed.

He said that the Department of Overseas Labor Management also discussed different scenarios and the respective solutions to the viral outbreak at Monday’s meeting.

The COVID-19 has killed 2,522 people and infected over 79,300 globally since it first hit the central Chinese city of Wuhan in December 2019, according to the South China Morning Post.

Among them, 15 have fully recovered and been released from the hospital. The country has recorded no new infection since February 13.