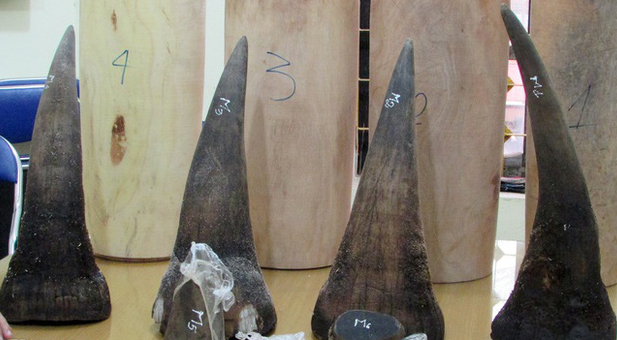 A Vietnamese man has been caught carrying nearly 30 kilograms of suspected rhino horns after his flight from South Korea landed in Vietnam.

The customs department at Can Tho International Airport, located in the namesake Mekong Delta city, confirmed on Tuesday they had booked Do Thanh Son, a 38-year-old Vietnamese citizen, for the violation.

However, the flight was redirected to Can Tho so that all passengers would be quarantined upon arrival as requested by Vietnamese authorities.

The Vietnamese government previously announced that all people arriving from South Korea must be quarantined for 14 days given the rapid increase in cases of the novel coronavirus disease (COVID-19) in the East Asian country.

Spotting suspicious signs, customs officers at the Can Tho airdrome asked Son to open his luggage for hand inspection.

The man refused to cooperate at first, explaining that the suitcases contained processed koi fish.

The suspected wildlife parts have been confiscated for further investigation, while Son has been sent to a quarantine area in accordance with regulations.

Transporting or trading wildlife parts is a criminal offense in Vietnam punishable by between six months and 12 years in prison, according to the country’s Penal Code.

South Korea has confirmed over 5,300 COVID-19 infections and 32 deaths by the disease as of Wednesday afternoon, making it the biggest cluster outside of China, according to the Vietnamese Ministry of Health.

COVID-19, which first surfaced in the central Chinese city of Wuhan in December 2019, has infected over 93,000 people and killed 3,202 globally, according to the same source.