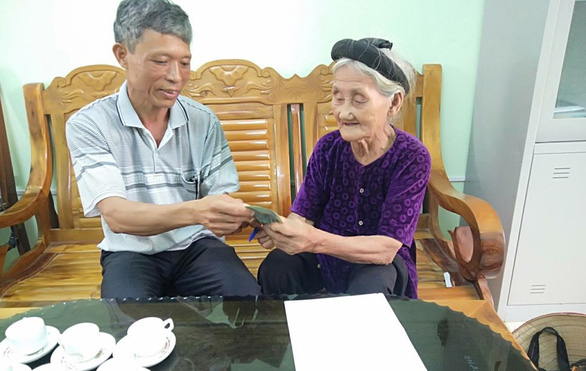 A 84-year-old woman from the north-central Vietnamese province of Thanh Hoa who last year asked authorities to stop classifying her household as “poor” has donated her life’s savings to the government’s cause of battling the novel coronavirus disease (COVID-19) epidemic.

The Vietnam Fatherland Front (VFF) chapter in Luong Son Commune, located in Thanh Hoa’s Thuong Xuan District, on Wednesday said that Do Thi Mo, a local woman, had made a donation of VND2 million (US$85) to support the government in its campaign to combat the epidemic.

Mo said she had been moved after watching Prime Minister Nguyen Xuan Phuc’s televised message calling on every Vietnamese citizen and resident to join hands in the nation’s fight against COVID-19.

The donation, although not a sizable amount, was her life’s savings comprising her meager income from selling homegrown vegetables and eggs, together with the pocket money she had received from her children and grandchildren over time.

While not a deep-pocketed person – she is classified as a “poor household” as per the government's definition – Mo doesn’t quite like feeding off financial support from the state.

A rural household is classified as poor in Vietnam if it has a monthly per capita income of VND700,000 ($30) or lower, or up to VND1 million ($42) but it lacks access to three out of five basic social services including healthcare, education, housing, clean water and hygiene, and information, according to a 2015 government decision.

Poor households are eligible for financial and housing support as well as low-interest loans to invest in their livelihoods, among other forms of support provided by the Vietnamese government to lift them out of poverty.

In 2019, Mo voluntarily applied for her household to be rid of the poverty status, saying there are people out there who are “in more need” of government support.

Authorities are still considering her request.

Despite her old age, Mo still grows vegetables and raises poultry to earn income and cover daily expenses, being financially independent of her children.

She was awarded the certificate of merit from the provincial chairman in October 2019 for setting a good example to the local poor.

In the same spirit as Mo’s, Tuoi Tre (Youth) newspaper together with the Ho Chi Minh City Young Business Association (YBA) has initiated a program calling for donations to support Vietnam’s COVID-19 cause.

The program, named ‘Fight COVID-19 with Tuoi Tre,” had received nearly VND17.5 billion ($635,401) in donations as of Wednesday afternoon.

People can make donations in person at Tuoi Tre’s headquarters at 60A Hoang Van Thu Street, Ward 9, Phu Nhuan District, Ho Chi Minh City, or at its representative offices in other provinces and cities.

Alternatively, readers in Vietnam can wire a bank transfer to the following account:

Readers outside of Vietnam can make a donation by international bank transfer to: