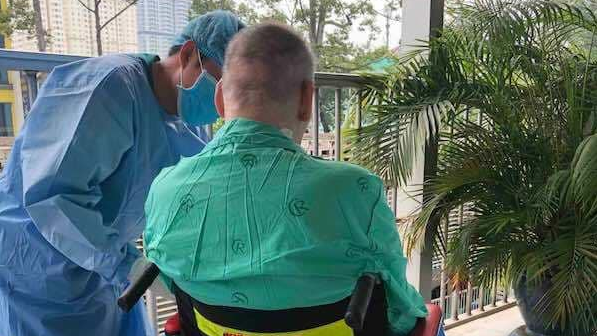 Vietnam’s most gravely ill novel coronavirus disease (COVID-19) patient, a 43-year-old British man, has been taken off his ventilator and can now breathe entirely unassisted, just over a month after a lung transplant was considered his only viable path to recovery.

The Briton had been breathing on his own for 24 hours, the treatment sub-committee under the Vietnamese Ministry of Health announced in its regular COVID-19 update at 6:00 pm Saturday.

He is able to breathe naturally via a tracheostomy tube while his respiratory muscle strength has also improved, with stronger coughs reported, the announcement read.

Doctors gave the green light to disconnect the patient from ECMO life support on June 3. It was predicted then that he would take weeks to be ready for withdrawal from a ventilator, which provides breathing support.

However, as the man’s recovery has progressed much faster than expected, he was allowed to wean off mechanical ventilation sooner.

Milk has been added to his daily diet of liquid food while doctors have reduced his medication to only one type of antibiotic.

The Briton continues to take physical therapy sessions two times a day to improve the strength of his legs so that he will be able to walk after recovery.

The 43-year-old man, a Vietnam Airlines pilot, was confirmed as the country’s patient No. 91 following his diagnosis in mid-March.

He was admitted to the Ho Chi Minh City Hospital for Tropical Diseases on March 18 with a damaged right lung.

His lung damage worsened in the following weeks to the point that doctors said in May a lung transplant was “almost the last resort” to save his life, sparking droves of Vietnamese people volunteering to donate parts of their lungs for the procedure.

On May 22, he was transferred to Cho Ray Hospital from the Ho Chi Minh City Hospital for Tropical Diseases after being declared free of the virus.

He has been making a remarkable recovery since.

Vietnam has reported 334 COVID-19 cases as of Saturday night, with 323 having recovered and no death, according to the Ministry of Health.