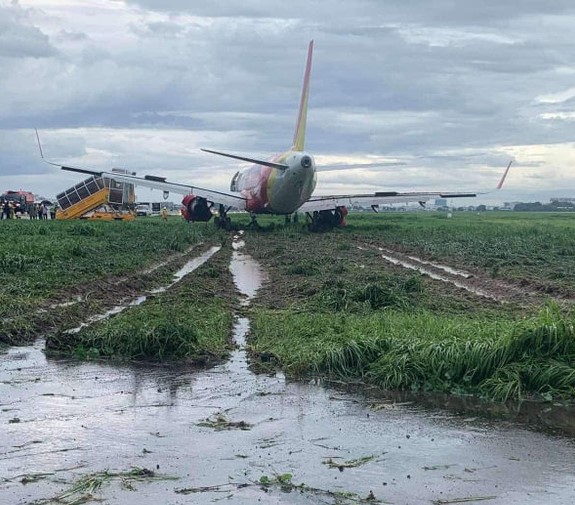 A plane veered off a runway while landing at an airport in Ho Chi Minh City on Sunday afternoon, with its carrier attributing the incident to rainy and windy weather conditions.

Flight VJ322 operated by budget carrier Vietjet Air touched down in Ho Chi Minh City at 12:10 pm after departing from Phu Quoc Island off Kien Giang Province in southern Vietnam, according to a source close to Tuoi Tre (Youth) newspaper,

As it was landing at Tan Son Nhat International Airport in the city, the aircraft slid off the runway, one of its wheels damaged.

All passengers and crew members aboard the flight were unharmed, and the plane was later pulled back to its track.

The runway was closed for 120 minutes.

It was raining then but the weather condition was not bad enough to affect landing at the airport, according to an aviation official.

Local authorities are investigating the cause of the issue.

A Vietjet representative confirmed the incident on the same day, attributing it to rain and strong winds.

Two similar incidents happened at Tan Son Nhat in 2009 and at Noi Bai International Airport in Hanoi in July 2018, the representative added.

The Vietjet plane skidded off the 25L/07R runway.