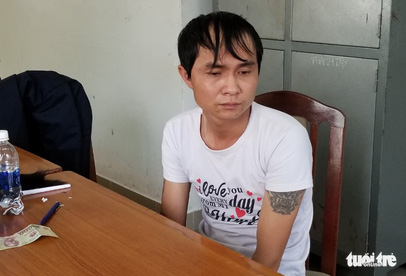 Man arrested for raping 9-yo girl in Vietnam's Central Highlands

A 34-year-old man was detained five days after he had kidnapped a nine-year-old girl and raped her at a cemetery in Da Lat, the capital city of Lam Dong Province in Vietnam’s Central Highlands.

The alleged rapist is identified as Nguyen Van Tuan, 34, a native of Thanh Hoa Province in north-central Vietnam who resides in the outlying district of Lac Duong in Lam Dong Province.

The victim, who lives in Ward 7, Da Lat City, was on her way home from school alone at around 7:00 pm on June 20 when she was abducted by Tuan, who drove her to the nearby Thanh Mau Cemetery on a scooter.

The man allegedly raped her there and fled the scene while the girl cried for help, prompting locals to bring her home.

Police officers in Ward 7 and Da Lat City made a report on the case on the same night and teamed up with investigators of Lam Dong Province to search for the man.

They found and arrested Tuan on Thursday while he was at a café in Lac Duong District.

The man has confessed to raping the girl.

He is facing seven to 15 years’ imprisonment for raping a person under 13 years of age, according to Vietnam’s 2015 Penal Code.