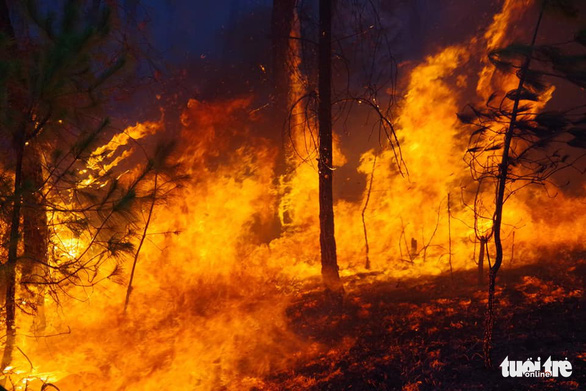 Conflagration destroys over 50ha of forest in Vietnam

A large fire fueled by heat and strong winds ravaged more than 50 hectares of forest in Vietnam in a matter of three days this week.

The conflagration was basically kept under control on Sunday morning, according to Nguyen Duc Trung, chairman of the Nghe An Province People’s Committee.

The firefighting forces are required not to become complacent because of the ongoing heatwave, Trung said.

The fire destroyed more than 50ha of forest, including pine and acacia trees, in three districts of the north-central province, namely Yen Thanh, Nghi Loc, and Dien Chau.

It started in a pine forest in Yen Thanh on Friday.

Police officers, soldiers, rangers, and local residents joined hands in the efforts to extinguish the flames, according to the Nghe An Province People’s Committee.

“This is the biggest forest fire to have hit Dien Chau District so far,” Quang said.

Local authorities have created a firebreak to prevent the forest fire from spreading to nearby residential areas while preparing to evacuate 250 households.

The firefighting forces are still on standby around the clock in case the fire starts raging again.