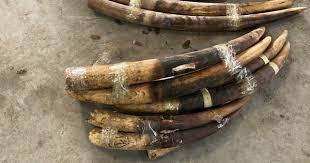 The Hanoi People’s Court on Thursday sentenced three men to a total of 32 years in prison for smuggling elephant tusks and rhino horns from Africa into Vietnam.

Nam and Phong were sentenced to 11 years in prison each, while Hung received a ten-year jail term for “violating regulations on the protection of endangered, precious and rare animals” under Article 244 of Vietnam’s 2015 Penal Code.

The three defendants were involved in the smuggling of 204 kilograms of elephant tusks and rhino horns busted by authorities in Hanoi on September 30, 2019, according to their indictment.

Nam, a.k.a. Nam ‘Beo’ (‘Fat’ Nam), was notorious for his roles in the illegal transportation of wildlife parts from Africa into Vietnam.

In a separate case, the People’s Court in the northern province of Hung Yen on Thursday sentenced Nguyen Dinh Hong, 31, to 11 years behind bars for “violating regulations on the protection of endangered, precious, and rare animals” and another five years for “destroying or intentionally damaging property.”

The illegal trade and smuggling of wildlife parts are considered hyper profitable in Vietnam, leading to many individuals disregarding the law to commit the crimes, according to the Vietnam News Agency.

To deter such crimes, the 2015 Penal Code raised the punishment for wildlife violations from seven years to up to 15 years in prison compared to the 1999 Penal Code.