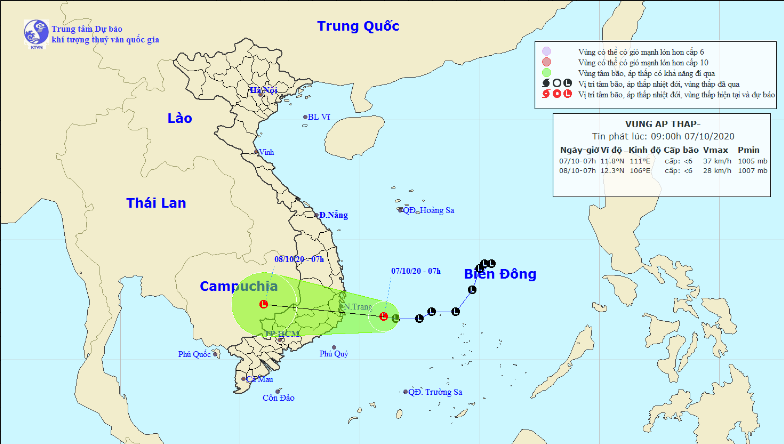 A low-pressure zone in the East Vietnam Sea is picking up strength and is forecast to make landfall in south-central provinces, bringing prolonged downpours to localities across central Vietnam.

As of 7:00 am on Wednesday, the low-pressure zone was located 170 kilometers east of the coast between Khanh Hoa and Phu Yen Provinces in the south-central region, according to the National Center for Hydro-meteorological Forecasting.

It will travel westward in the next 24 hours and make landfall between Khanh Hoa and Phu Yen.

Average wind speeds of 40 to 50km per hour are expected with gusts up to 75km an hour.

The tropical depression will continue heading west and weaken in the next 24 to 48 hours.

Due to the combined effects of a tropical convergence zone, the low-pressure area, and a cold front, heavy rain dampened localities from north-central Ha Tinh Province to south-central Phu Yen Province on Tuesday and Wednesday morning.

From October 6 to 11, torrential rain measuring at an average of 300-500 millimeters will dampen central localities

The heaviest downpours, estimated at 500-700 millimeters, will be recorded in localities from north-central Ha Tinh Province to central Quang Ngai Province.

Medium to heavy rainall of 150-250 millimeters will occur in the Central Highlands and southern Vietnam, including Ho Chi Minh City, during this period.

From October 11, rain is forecast to linger in central Vietnam for a long period.