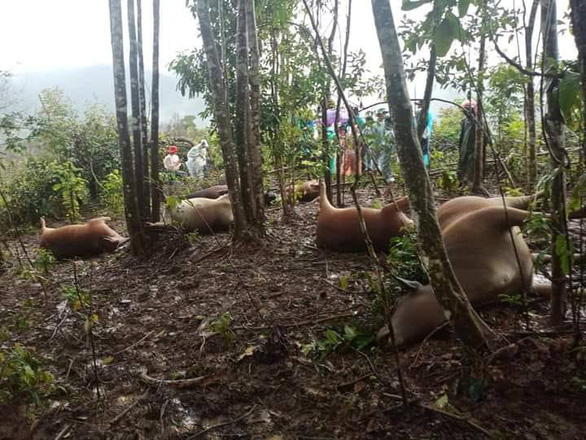 Lightning killed seven cows in a province in central Vietnam on Thursday, as the region was hit hard by rain and ensuing flash floods.

Lightning struck seven cows of a household in Tay Giang District to death during the rain, Le Hoang Linh, deputy chairman of the district, said in the afternoon.

Landslides triggered by rain and flash floods isolated a few mountainous communes in Quang Nam on Thursday while some makeshift bridges were swept away by floodwaters which also hit a local middle school.

Students were told to stay home given such dangers.

A resident died of electrocution when he was packing to avoid the floods.

Hoi An Ancient Town, a touristy destination in Quang Nam, was also submerged under rainwater, Nguyen The Hung, standing deputy chairman of Hoi An City, said, adding the city was relocating dwellers in low areas.

Flooding is forecast to become worse during the day, Hung warned.

Local hydroelectric dams are ready to discharge water, which creates even more dangers for lower areas in Hoi An.

Hoi An Ancient Town has already suspended activities on pedestrian streets, with officials poised to react quickly whenever the situation turns for the worse, said Nguyen Van Lanh, another deputy chairman of Hoi An.