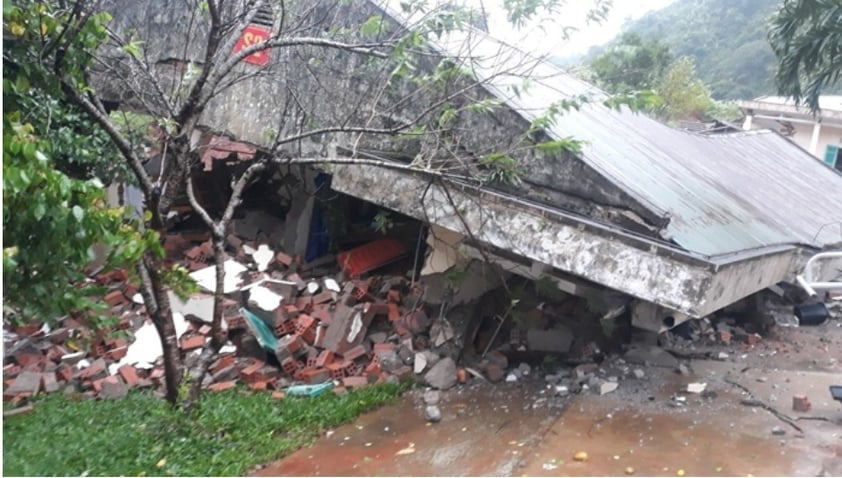 Many border guard officers in the north-central Vietnamese province of Quang Binh have been confirmed safe after massive amounts of soil and rocks were washed downhill and destroyed many houses at their headquarters.

In the morning, many cracks were discovered along the local roads and the walls of several houses within the border guard station.

Subsidence also occurred in some nearby areas that morning.

As the signs posed potential dangers, all officers along with their weapons and important documents and assets were promptly evacuated.

Residents living nearby were also brought to a safer area.

At around 7:00 pm on the same day, the first landslide hit the area and damaged multiple houses where the officers had previously stayed.

The landslides damaged a 300-meter section of National Highway No. 12 as well.

Serious landslides have been triggered by torrential rain in central Vietnam over the past few weeks.

On Sunday last week, an incident killed 22 soldiers of Economy-National Defense Delegation No. 337 who were inside their station in north-central Quang Tri Province.

On October 12, a landslide took place at the Rao Trang 3 hydropower dam in central Thua Thien-Hue Province, with two workers confirmed dead and at least 15 others missing and feared dead.

Another landslide later that night killed 13 soldiers and officials while they were on the way to search for the missing workers. Their bodies were recovered on Thursday last week.

Local authorities are still exerting their best efforts to search for the missing workers at the Rao Trang 3 hydropower dam.