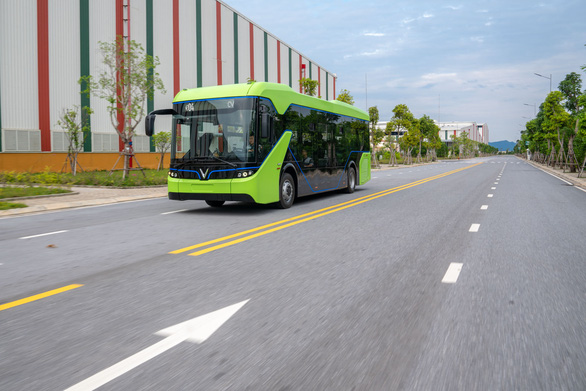 The electric bus is designed to fulfil Vietnam’s requirements on bus operation, the most popular means of public transport in the country.

Two V-shaped plaques, the VinFast Logo, are featured on the front and rear of each bus, while the word 'green' printed on the exterior denotes that the vehicle is environment-friendly, a VinFast representative explained.

As seen during the test drive, the bus was painted green and black, with an LED screen attached to the front to display the route.

It operated on electric batteries with a capacity as high as 281 kilowatt-hours which can be fully charged in just two hours using a 150-kilowatt charger and is capable of sustaining the car for 220 to 260 kilometers.

Though details on the bus’ components, including the model and make of the engine and battery, have not yet been released, experts spotted the logo of ZF – a key player in the automotive gear sector – printed on the vehicle's wheel discs.

According to the VinFast representative, the bus will also be equipped with updated safety and passenger comfort technology, such as systems to monitor driver fatigue, LED destination displays, free Wi-Fi connection, and entertainment screens.

The vehicles will also be furnished with USB ports for charging, surveillance cameras, dashcams, rear-view cameras, and right-hand view cameras.

Vingroup announced that it has completed staff recruitment and is nearly finished with the infrastructure and vehicle systems the company needs to launch the new vehicle.

Their service will be piloted in Hanoi, Ho Chi Minh City, and Phu Quoc.

In 2019, Vingroup announced the launch of VinBus, working in passenger transport.