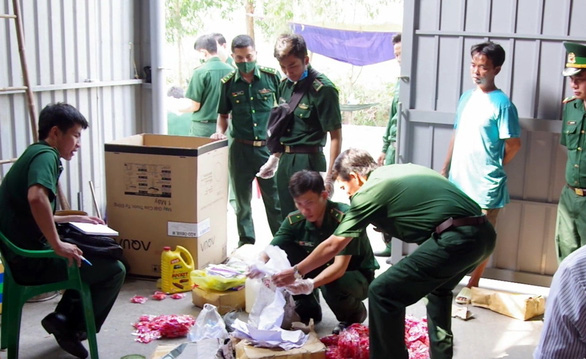 Vietnam breaks up ring that illegally mixed gasoline for sale

Border guards in Vietnam have busted a racket that had unlawfully mixed gasoline for sale since September, only 70 percent of the fuel being real.

Senior Lieutenant Nguyen Hung Son, a chief commander of the border defense force in southern Ba Ria-Vung Tau Province, on Thursday said his team had finished taking down the fuel ring based in Vung Tau City, a touristy destination in the province.

The warehouse belongs to Nguyen Van Nhan, 35, director of 89 Gasoline Trading and Transport Company. Nhan failed to present legal documents proving the origin of the fuel during the swoop.

The warehouse was used as a facility for mixing fake fuel, according to border guards' investigation.

According to their testimony, Nhan previously used the warehouse as a tanker parking lot for fuel transport.

However, Nhan and Nguyen, a shareholder in 89 Gasoline Trading and Transport Company, had been using the facility to illegally mix fuel since early September.

Nhan’s product was made using 70 percent of real gasoline with 30 percent of toluene and coloring having been sourced from Kim Bien Market in Ho Chi Minh City and Phu My Town in Ba Ria-Vung Tau.

The ring had been manufacturing fake fuel to sell to customers in Binh Duong and Dong Nai Provinces since September, Nhan admitted.

Authorities have booked the case and confiscated the evidence to assist in their further investigation.