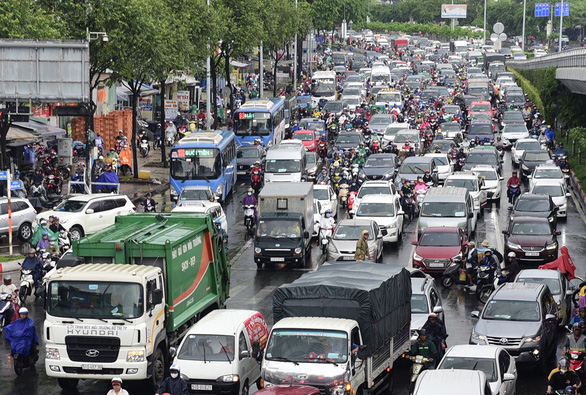 The number of personal vehicles in Ho Chi Minh City has exceeded 8.1 million, while the cumulative length of city streets totals 4,291.9km, of which only 1,827km, or 42 percent, is over seven meters wide, according to government statistics.

Government data also shows that sixty-seven percent of the streets are concentrated in the city center.

Meanwhile, the population remains dense across the entire metropolis and depends heavily on personal vehicles for commuting.

Congestion has only increased as new urban areas are built but remain disconnected from public bus networks.

While the public bus system does help ease some of the congestion, the fact that the city’s 1,800 public buses are unable to traverse small streets is a major hindrance to solving local traffic issues.

As part of a project aimed at tackling congestion in Ho Chi Min City, the Department of Transport is urging the Ministry of Transport to approve a proposal to create a network of minibuses capable of transporting passengers through the city’s narrow streets.

The proposal, which pushes for the use of modern vehicles with under 17 seats, also includes a call to use a mobile ticket-booking app for reservations in the bus system.

“Private investors will purchase the buses using their own funds and ticket sales will be market-driven, relieving the burden on the state budget,” said Tinh, whose statement appeared to jab at the public bus system's financial burden on state coffers.

Critics of the proposal, however, have pointed out that portions of the plan go against Vietnam’s current regulations on public bus transport.

Specifically, it is currently regulated that buses carrying public passengers must have a capacity of 17 seats or more.

Those with a capacity of between 12 and 16 seats can only transport public passengers on routes with bridges whose load capacity is less than five metric tons or roads measuring less than seven meters in width.

Current regulations also require that public buses have standing room while the minibuses included in the proposal would have no standing room.

Many public transport experts have voiced support for the government amending the regulations in order to implement the plan.

“The transport ministry should reconsider this proposal, or at least allow it to be piloted for a few years,” Tinh advised.

Likewise, other experts have suggested that the project be reevaluated as the minibuses will be a fundamental means of transport for passengers to travel to and from metro lines when the city’s metro system comes online in 2021.