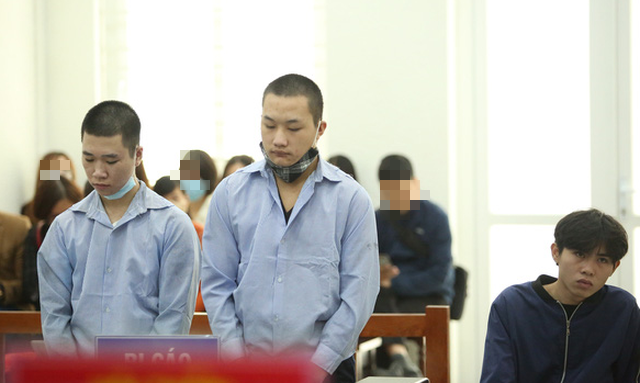 Two teenage boys have been sentenced to a total of 40 years in prison for stabbing a GrabBike driver and robbing him in Hanoi in mid-July.

The municipal People’s Court on Monday conducted the trial of Giang Seo Diu, 18, who hails from the northern province of Lao Cai, and Luu Ngoc Vy, 17, who is from northern Thai Binh Province.

Diu was sentenced to a combined 26 years in jail, including 18 years for murder and eight years for robbery.

Vy was put behind bars for 14 years in total for the same offenses.

According to the indictment, Diu and Vy, who are both unemployed, became acquainted with one another in Hanoi after leaving their hometowns.

In July, the two planned on robbing local motorbike taxi drivers for money to support their gaming habit and other personal needs.

Diu bought a 20-centimeter-long knife near My Dinh Stadium on July 17 and met Vy to discuss their scheme.

At around 1:30 am on July 19, the two targeted N.V.Q., a 36-year-old GrabBike driver, who parked on Ton That Thuyet Street in Nam Tu Liem District.

After reaching the destination, the two asked Q. to take them to a few more places, before telling him to pull over in a secluded area near the Duong River.

Vy then pulled out the motorbike’s key and grabbed the victim, while Diu stabbed him multiple times with his knife.

They only stopped when the victim begged for mercy.

The two criminals took VND6.1 million ($263) from Q.’s wallet and his motorbike.

They later sold the vehicle for VND4.5 million ($194) in northern Bac Giang Province, before returning to Hanoi to spend the money on gaming.

Q. was brought to the hospital by local residents and was able to survive the serious injuries.

On July 23, Vy saw the news about his crime on the Internet and told his friend – Nguyen Van Son – the truth.

After Diu was arrested on July 24, Vy decided to turn himself in two days later.

Aside from the jail terms, Diu and Vy were also required to pay the victim VND200 million ($8,620) as compensation.

Son was given a nine-month suspended sentence for failing to report the crime.