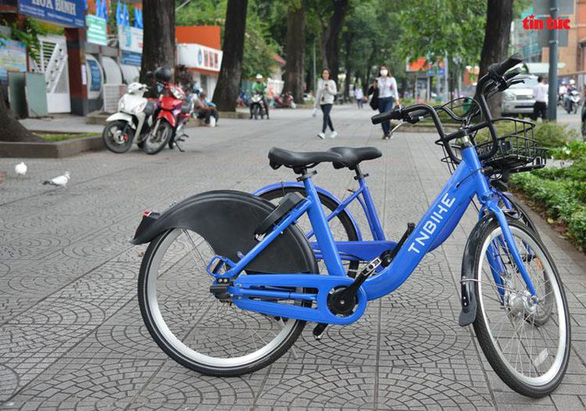 The Ho Chi Minh City Department of Transport said on Friday afternoon that the municipal People’s Committee had given an in-principle approval for piloting a public bicycle-sharing system, named Mobike, in some areas across the city for 12 months.

The bicycle-sharing system, invested and operated by Tri Nam Group JSC, is meant to expand the network of public transport connections and thus, limit private vehicles in the inner-city areas in the coming time.

Each station will have ten to 20 bikes, each of which will be installed with smart locks and a GPS system.

In order to use the service, residents will need to download the Mobike app on their smartphones.

Tri Nam will provide tickets for 15-minute, 30-minute, and 60-minute rides as well as daily, monthly, quarterly, and annually tickets.

During the first one to three months, people will be offered a free of charge use for the first 15 minutes.

To prevent the bicycles from being stolen, users will be required to provide and verify their personal information.

Each bicycle will have a unique ID card, so that operators can monitor where the vehicle is and who is using it through a central software system.

The smart locks will also send an alarm signal if they are being forced open.

The bicycles will be designed with distinctive and irreplaceable features so as they are not tradable in the market.

In the initial phase, bicycle-sharing users are expected to ride the bikes on the same lane as other vehicles.

After assessing the efficiency of the system in the 12-month trial phase, the municipal authorities will consider establishing other connected public transport systems.

In the future, the municipal Department of Transport will research on opening a bicycle lane or widening streets for the bikes.

The municipal authorities also have plans to develop an integrated application for all users of metro, public bikes, and public buses, with a goal of providing the locals appropriate types of public transport anytime and at any place.

The transport department is completing the report on the proposed pilot of the Mobike bicycle-sharing system for submission to the municipal Standing People's Committee for consideration and approval.