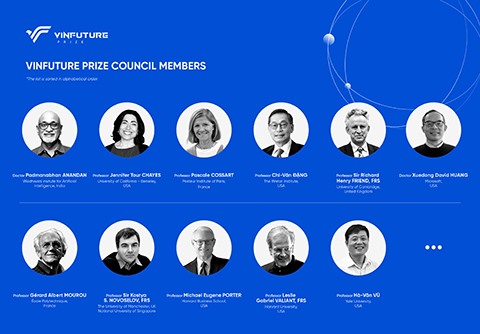 Vietnam’s dollar billionaire Pham Nhat Vuong and his wife, Pham Thu Huong, on Sunday debuted The VinFuture Prize to reward global scientific and technological excellence, with the couple already committing an initial US$100 million to fund the foundation that presents awards annually.

The VinFuture Prize is the first global science and technology award from Vietnam and one of the world’s largest annual prizes in the fields, the Southeast Asian country’s largest conglomerate Vingroup, where Vuong is founder and chairman, said in a statement the same day.

Vuong, considered Vietnam's richest man whose net worth reaches $6.6 billion on Forbes’ real-time list on Sunday, and his wife will pour $4.5 million yearly into VinFuture Foundation to fund The VinFuture Prize.

The vision of this endeavor is to “create meaningful change in the everyday lives of millions of people by promoting breakthrough scientific research and technological innovations.”

The foundation works to honor exceptional minds whose research and technological innovations will improve the quality of life and ensure sustainable living for future generations by addressing the everyday issues of people, aligned with one or more of the UN Sustainable Development Goals (SDGs).

Keeping in mind its origin in a developing country, VinFuture Prize will seek to ensure that fair and equal opportunities are accessible to all scientists and innovators, especially those who are making efforts with limited resources.

The grand prize of $3 million will be one of the largest annual global science and technology prizes in value.

It would be open to all, regardless of the candidate’s nationality, age, gender, social status, or economic background.

The prize will be awarded to proven breakthrough research and technological innovations that positively improve the quality of human life, and create a more equitable and sustainable world for future generations.

In addition to the grand prize, three special prizes of $500,000 each will also be awarded per annum, with a focus on promoting diversity, equity, and new fields of study.

Nominations will be solicited from a large, diverse pool of distinguished nominators, including globally renowned scientists and innovators, academic institutions, technology corporations, and prestigious innovation incubators in all countries.

An independent Prize Council, consisting of distinguished, globally renowned experts from academia, research and industry, will adjudicate The VinFuture Prize each year.

Members of the Prize Council come from diverse sciences and professional disciplines, cultures, and viewpoints, including Nobel Prize winners.

Vuong and his wife, as founders of the VinFuture Foundation, have personally committed an initial amount of $100 million, which would be further enhanced in the future to fund the VinFuture Prize’s resources and administration process and to ensure the sustainability of the foundation’s long-term operations.

“Creating positive change and having a direct impact on people’s lives have always been my purpose in business and life,” 52-year-old Vuong said.

“The events of 2020 show that now more than ever, we need to bring together extraordinary individuals with good hearts and great minds who can strive toward realizing the power of science and technology in overcoming our toughest global challenges, and improving people’s lives.”

Nominations for the first edition of The VinFuture Prize will be open from January to June 2021.

The names of the selected VinFuture Prize laureates will be announced on December 2021.

The official awards ceremony will be hosted in Vietnam in January 2022.