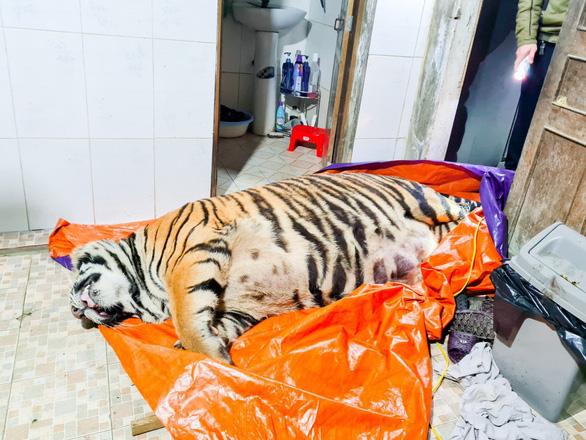 Authorities in Vietnam on Wednesday said they had discovered a 250kg tiger being tortured at the home of a man who later admitted that he had bought the animal from another province in order to produce tiger balm.

Police officers raided the residence of D.N.Ngh.,49, in Quang Diem Commune, Huong Son District, north-central Ha Tinh Province at around 11:00 pm on Tuesday after receiving a tip-off that he had been housing wildlife.

In a now-viral video, a large tiger was seen lying unconscious on a canvas surrounded by electric wires.

Ngh. had already fled by the time police raided the residence.

“Ngh.’s family does farming and raises deer,” a leader of the People’s Committe of Quang Diem Commune said, adding that authorities are still waiting to receive the official police report.

Ngh. turned himself in to Huong Son District police late Wednesday morning, when he admitted that he had bought the animal from north-central Nghe An Province to produce tiger balm.

Tigers remain critically endangered in Vietnam, with only five left in the wild in 2016, down from 30 in 2011, according to the World Wildlife Fund.

Vietnam began recognizing the protected wildlife species listed by CITES (the Convention on International Trade in Endangered Species of Wild Fauna and Flora) in 1994.

Currently, Vietnamese law prohibits the trafficking of protected wildlife, such as tigers, pangolins, and rhinos, as well as the illegal trade or killing of wildlife.

Still, campaigners say the illegal trade continues to flourish as the profit from trafficking wildlife far outweighs the punishment.

In Vietnam, fines are less than US$500 in about half of the violation cases, based on the figures available to the Wildlife Trade Monitoring Network TRAFFIC.